CityPlace is a neighbourhood in Downtown Toronto, Ontario, Canada, within the former Railway Lands. When completed, this area will be the largest residential development ever created in Toronto. The area is bordered by Bathurst Street to the west, Lake Shore Boulevard to the south, and Front Street to the north and Blue Jays Way and Rogers Centre to the east. Cityplace is also a 5- to 10-minute walk from King Street West and Liberty Village and a 10- to 20-minute walk from Toronto's financial district. The neighbourhood is also home to the Canoe Landing Park designed by famed Canadian writer and artist Douglas Coupland.

What is now CityPlace was originally conceived as a way to revitalize what was Canadian National's former Spadina Street Yard Facility, which was part of the extensive Railway Lands in the waterfront area. 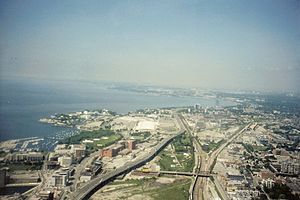 Railway Lands west of the CN Tower in 1999, shortly before new developments transformed the area into CityPlace in the early 21st century.

Going as far back as 1965, when CN began to shift the functions of many of its yards in the Greater Toronto Area to a centralized facility in the northern suburb of Vaughan, there had been plans to revitalize this part of downtown. One of them called for the construction of a large television/telecommunications tower as a showcase of Canadian industry, which was realized in the 1970s with the CN Tower in addition to the massive Metro Centre which was later cancelled. Further development took place in the 1980s, with the 1984 completion of the Metro Toronto Convention Centre drawing new attention to the area.

With the arrival of new visitors and development of new commercial draws, a fresh master plan was drawn up by the City of Toronto for revitalization of this area. At the same time Via Rail, the sole remaining occupant of the Spadina Street Yards, relocated their local operations to the newly built Toronto Maintenance Centre in New Toronto, freeing up the lands necessary for the planned revitalization. Work commenced after the demolition of the last railway buildings with the construction of SkyDome, which was completed in 1989.

At the same time, a new network of roads, parks and infrastructure began to take shape. The project proceeded smoothly until an economic downturn caused many of the development plans to be shelved, and much land stood abandoned until 1997 when construction of the Air Canada Centre arena commenced. 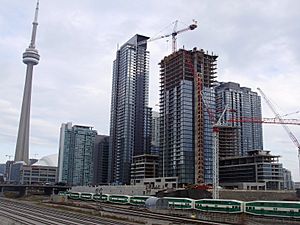 Construction in CityPlace in 2008, looking south from the Union Station Rail Corridor. CityPlace reached its final phase of redevelopment in the early 21st century.

This began the third and final phase of redevelopment called CityPlace which called for a multipurpose development of commercial, residential, and retail along the western section of the Railway Lands. The current CityPlace development was conceived by Concord Adex Developments, the same company that helped revitalize a large section of former Expo 86 lands in Vancouver, who purchased the land in 1997 from the Canada Lands Company.

The final portion of CityPlace to be developed is Block 31. Initially, the proposal for Block 31 included a 42-storey mixed-use tower (alongside schools and community centre). It was criticized for the shadows it would cast over nearby amenity spaces and the site's adjoining Canoe Landing Park, as well as the views it would partially obstruct.

Following a round of public consultations in early 2015, the new schematic design for Block 31 was revealed. It will include two schools and a new community centre. Toronto District School Board (TDSB) and the Toronto Catholic District School Board (TCDSB) have both been designated to use the new space. The shared school building will seek to maximize spatial efficiency, with a common gym and theatre complex for both schools. Block 31's design attempts to maximize available green space. With an articulated green roof spanning the complex's footprint. The 150,000 square foot complex is expected to cost $55 million to construct, and is set to be completed by 2019. The schools are Jean Lumb Public School, named after Jean B. Lumb, the first Chinese Canadian woman and the first restaurateur to receive the Order of Canada for her community work; and Bishop MacDonell Catholic School, which is named after Alexander Macdonell, the first bishop of Kingston in Upper Canada 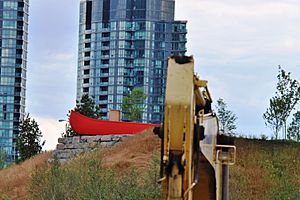 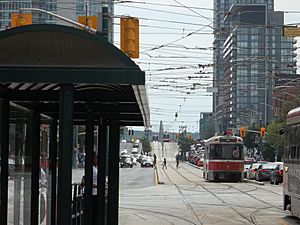 With its location nestled between the Gardiner Expressway and Union Station, CityPlace is a very accessible area. The development is also serviced by the Toronto Transit Commission's 509 Harbourfront, 510 Spadina, and 511 Bathurst streetcar lines.

In addition, a median is being set aside along Fort York Boulevard, the main thoroughfare through Cityplace, so that it can be used for a streetcar route by the TTC in the future.

A footbridge (Puente de Luz or Bridge of Light) is a pedestrian and cycling crossing from CityPlace to Front Street across the railway tracks was opened in October 2012, but promptly closed due to concerns over the sharpness of clips holding the controversial mesh to the sides of the bridge, as well as concerns over people tripping at joins while using the bridge. Those issues were dealt with, and the bridge reopened in December 2012. The 100m bridge is designed by sculptor Francisco Gazitua of Chile.

All content from Kiddle encyclopedia articles (including the article images and facts) can be freely used under Attribution-ShareAlike license, unless stated otherwise. Cite this article:
CityPlace, Toronto Facts for Kids. Kiddle Encyclopedia.