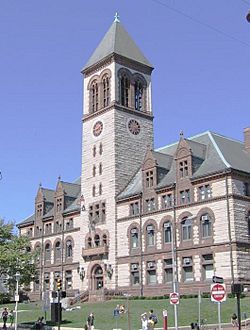 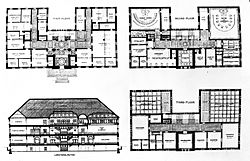 The hall was built between 1888–1889, and was largely funded through a donation from Frederick Hastings Rindge. The architects were Longfellow, Alden & Harlow (Alexander Wadsworth Longfellow, Jr., 1854–1934; Frank E. Alden, 1859–1908; and Alfred B. Harlow, 1857–1927). The building is three stories tall, with a bell tower that rises to 158 feet. Load-bearing stone walls are of Milford granite trimmed with Longmeadow brownstone.

Cambridge City Hall houses offices for the city council, the city manager and several municipal departments. In addition to the main building, the city of Cambridge also houses several other departments a couple of city blocks away in the City Hall Annex, located at Broadway and Inman Street.

All content from Kiddle encyclopedia articles (including the article images and facts) can be freely used under Attribution-ShareAlike license, unless stated otherwise. Cite this article:
City Hall (Cambridge, Massachusetts) Facts for Kids. Kiddle Encyclopedia.