The City Police Courts, commonly called Minshull Street Crown Court, is a complex of court buildings on Minshull Street in Manchester, designed in 1867–73 by the architect Thomas Worthington. The court was designated a Grade II* listed building on 3 October 1974. 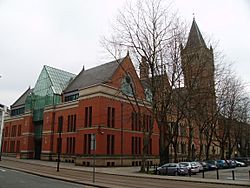 The style is Worthington's trademark flamboyant Flemish Gothic with a massive corner tower and a chimney stack styled as a campanile. The courts are constructed in red brick with sandstone dressings and steeply-pitched slate roofs. There is a profusion of animal carving by Earp and Hobbs. Worthington drew both on his rejected designs for the Town Hall, and on his earlier plans for Ellen Wilkinson High School, although the central tower he used there is placed asymmetrically at the Police Courts, due to the constraints of the site. The interior court rooms "have been preserved with relatively few alterations."

In 1993-96, the buildings were extensively modernised. The original courtyard was glazed over and an extension was added to the Aytoun Street side of the courts. The architect for these works was James Stevenson of the Hurd Rolland Partnership.

All content from Kiddle encyclopedia articles (including the article images and facts) can be freely used under Attribution-ShareAlike license, unless stated otherwise. Cite this article:
City Police Courts, Manchester Facts for Kids. Kiddle Encyclopedia.