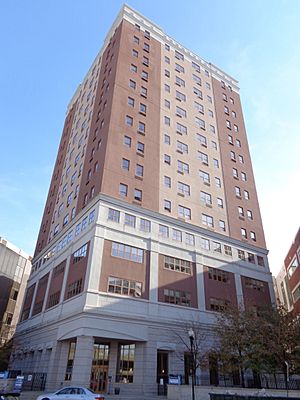 The last of a series of county courthouses, the Middlesex County Court House was built in 1958. The building was extensively renovated in 2003, including a partial new facade. The County Courthouse houses all Parts of the Law Division of the New Jersey Superior Court (Criminal, Civil, and Special Civil) for the Middesex Vicinage, as well as the General Equity Part of the Middlesex Vicinage Chancery Division.

Skyline Tower, at 14 stories and 59 m (194 ft), was originally built in 1967 as the Middlesex County Administrative Building. It was extensively renovated in 2003 as residential mixed-used building; however, its lower floors continue to house court facilities, including the Records department for the Civil Part of the Law Division and the General Equity Part of the Chancery Division, as well as chambers for those judges of the Appellate Division who sit in New Brunswick. A new Administration Building was completed in 1999.

All content from Kiddle encyclopedia articles (including the article images and facts) can be freely used under Attribution-ShareAlike license, unless stated otherwise. Cite this article:
Civic Square, New Brunswick Facts for Kids. Kiddle Encyclopedia.