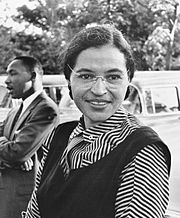 Rosa Parks in 1955. She became famous for refusing to obey set regulations. Her individual action of civil disobedience started the Montgomery Bus Boycott, which is one of the largest movements against racial segregation. In addition, this launched Martin Luther King, Jr., who was involved with the boycott, to prominence in the civil rights movement

Civil disobedience is the active refusal to obey certain laws, demands and commands of a government, or of an occupying power, without resorting to physical violence. It is one of the primary tactics of nonviolent resistance.

Mohandas Karamchand Gandhi (also known as Mahatma Gandhi) used non-violent civil disobedience in South Africa in a campaign for civil rights for the people who came from India and lived in South Africa. This campaign was from 1893-1914. When Gandhi returned to India, he used civil disobedience in the campaign for the independence of India in 1930 from the British rule, when India was a British colony.

Dr. Martin Luther King, Jr, and young activists in the American Civil Rights Movement of the 1960s also adopted civil disobedience techniques, during and after the Vietnam War.

All content from Kiddle encyclopedia articles (including the article images and facts) can be freely used under Attribution-ShareAlike license, unless stated otherwise. Cite this article:
Civil disobedience Facts for Kids. Kiddle Encyclopedia.