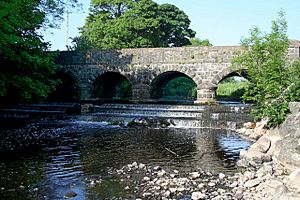 Glenone Bridge over the Clady

The River Clady (also known further up the river as the Swatragh river) is a Medium to Large sized river in County Londonderry, Northern Ireland, a tributary of the Lower Bann.

The River starts up the Carntogher mountain along with the Grillagh and flows eastwards towards swatragh this small stretch is also known as the Knockoneil river or Upper Clady and is only about 10 to 15 feet wide after this the river widens as it passes through swatragh and onwards to Upperlands where energy from the river is used for Clarke's mill. It flows onwards outside Culnady where it widens quite drastically round the old Dunglady Bridge around 20 to 30 feet across it then flows onwards where it joins the Grillagh river the rivers largest tributary. Here it widens yet again this part would be the Lower Clady floods can be up to 20 foot at this point it flows in silence through Eden townland under the Eden Bridge Also known as the Drumnacannon Bridge the river stays like this until I reaches Clady where it widens even more up to 30 to 40 feet wide it flows by innishrush and down a rocky gorge like terrain behind Clady under the Old Clady bridge and settles back down as it approaches the Glenone Bridge where the water is 40 foot+ until it meets the river Bann. The river is medium to large size and flows under 13 bridges. Water is measured at Glenone Bridge, an old bridge under which the river flows before it empties into the Lower Bann.during a flood it can turn from a small quiet trickle to an intimidating torrent within a few hours of heavy rain which took the life on Robert Reid and Agnes Henry in the 1920s when they went over the Clady bridge into the raging river below sucked below the rapids due to the currents in the river which would be 1000s tones worth of water raging down the hills from slaughtneil.

There is a fishing club house located along its banks just outside Clady. The facility consists of a fish counter and a weir constructed in 2011 for salmon spawning. Multiple fishing piers are located along the embankment. The best time to catch a fish is in the months of September and October before the fishing season ends on 31 October.

Grillagh River is the largest tributary to the Clady River and is the only tributary properly fishable. This small to medium-sized river rivals the size of the upper River Clady around 10 feet to 20 so feet wide. The river starts up in Slaughtneil and flows down into and through Culnady before emptying into the Clady below Curdian Bridge regarded to be as good as the Clady when it comes to fishing. The river boasts a lot of brown trout and even salmon come autumn time.

Green Water Burn Starts south of brockaghboy windfarm and flows a few miles and into the Clady.

Corlacky Burn Starts on the Corlacky hill and flows into the Clady.

Craigavole Burn The Craigavole burn is the 3rd largest tributary of the Clady river it starts in Craigavole townland and flows east of Swatragh underneath the GAC Swatragh football pitch and rounds a circle east of the town and then straight south and flows into the Clady north of Beagh Bridge.

Carnaman Burn This is the second largest tributary dominated only by the much larger Grillagh River it starts in the boglands in Lavey near gulladuff and flows north and swings to the east through the lowlands through eden south of McGoldrick transport and into the clady not to far from clady village. this burn may hold stocks of small fish or even trout spawning beds on its final run.

The Roohan Burn a small tributary to the Grillagh which runs at the bottom of Tirkane up in Slaughtneil boasts stocks of juvenile brown trout The Altkeeran Burn at the foot of Carntogher Mountain is the origins of the Grillagh River which is where most late Autumn Salmon Return to spawn.

All content from Kiddle encyclopedia articles (including the article images and facts) can be freely used under Attribution-ShareAlike license, unless stated otherwise. Cite this article:
Clady River Facts for Kids. Kiddle Encyclopedia.