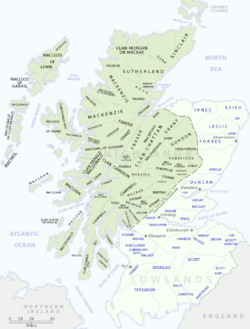 A clan is a group of people who – following a tradition – belong to the same kin. The word comes from the Gaelic language, and means 'family'. It is similar in meaning to the more general word tribe.

In Europe, the best-known clans system is that in Scotland, which still has some effects today, especially in the Scottish Highlands and Islands. It existed before the land was unified under a Scottish king, and continued long afterwards. Clans also existed in Ireland

All content from Kiddle encyclopedia articles (including the article images and facts) can be freely used under Attribution-ShareAlike license, unless stated otherwise. Cite this article:
Clan Facts for Kids. Kiddle Encyclopedia.