Actress Clara Morris was born in Toronto, the eldest child of a bigamous marriage. Sources disagree on the year of her birth, writing it as any of the years from 1846 – 1849, inclusive.

When she was three, her father, whose name was La Montagne, was exposed as a bigamist and her mother moved with Clara to Cleveland, where they adopted Clara's grandmother's name, Morisson. Young Clara received only scanty schooling. In circa 1860 she became a ballet girl in the resident company of the Cleveland Academy of Music, shortening her name to Morris at that time. At the Cleveland Academy of Music, Morris worked under the management of John A. Ellsler.

After nine years of training with that company she played a leading lady at Wood's Theatre in Cincinnati in 1869. She then appeared in Halifax, Nova Scotia for a summer and with Joseph Jefferson in Louisville before going to New York City in 1870. She made her New York debut in September in "Man and Wife," directed by Augustin Daly at his Fifth Avenue Theatre. The role had come to her by chance, but she made such an impression in it that Daly starred her in a series of highly emotional roles over the next three years in such plays as "No Name," "Delmonico's," "L'Article 47," "Alixe," "Jezebel," and "Madeline Morel."

Mr. Daly engaged her to play in the Fifth-avenue Theatre, then located on West Twenty-fourth street; not as a leading act, but to fill whichever roles he deemed necessary. In the season of 1870–71, Man and Wife was in preparation for opening when the lead lady originally designated to play the role of Anne Silvester declined the part, and Ms. Morris stepped up to the position. On the opening night, September 13, she made her debut in a major city, and ended up being recalled in an early scene in the play before the act was terminated - an unusual occurrence in the theatre at the time.

She left Daly in 1873 and in November of that year starred under A.M. Palmer's management in "The Wicked World" at the Union Square Theatre.

In 1872, she made a sensation in L'Article 47. Other successes followed and she became known as an actress distinguished for spontaneity and naturalness.

Over the next few years Morris had great successes in "Camille" in 1874, "The New Leah" in 1875, "Miss Multon" (an American version of a French version of "East Lynne"), her most popular role, in 1876, "Jane Eyre" in 1877, and "The New Magdalen" in 1882. She also toured extensively, especially in the 1880s, and everywhere mesmerized audiences with her emotional power. Although neither a great beauty nor a great artist, nor trained in elocution or stagecraft, she had an instinctive genius for portraying the impassioned and often suffering heroines of French melodrama.

The passing of the vogue for that sort of theatre, together with her uncertain health, brought her career to a close in the 1890s.

In retirement in Riverdale, New York, she contributed articles on acting to various magazines, wrote a daily newspaper column for ten years, and published numerous books. 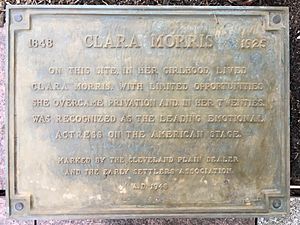 She married Frederick C. Harriott on November 30, 1874; Morris supported Harriott until he started acting with her, in 1892.

Complete blindness overtook her in 1910, and her old age was embittered by poverty. The house in which she had lived for 37 years was sold in 1914, and Morris moved to Whitestone, Long Island.

There is a plaque on the grounds of the Cleveland Public Library marking the location of Clara Morris' home when she was young. The plaque reads: "On this site, in her girlhood, lived Clara Morris. With limited opportunities she overcame privation and, in her twenties, was recognized as the leading emotional actress on the American stage." 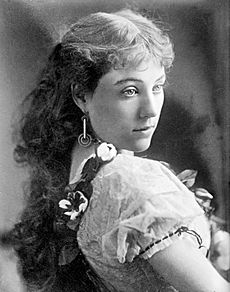 Other notable roles of her career are:

For some years after 1885, she devoted herself mainly to literary work, writing:

In her book Life on the Stage: My Personal Experiences and Recollections she recounts her meeting with John Wilkes Booth the assassin of Abraham Lincoln.

Barbara Wallace Grossman published A Spectacle of Suffering: Clara Morris on the American Stage in 2009, chronicling Morris' "importance as a feminist in the late nineteenth and early twentieth centuries."

All content from Kiddle encyclopedia articles (including the article images and facts) can be freely used under Attribution-ShareAlike license, unless stated otherwise. Cite this article:
Clara Morris Facts for Kids. Kiddle Encyclopedia.