Claus Philipp Maria Schenk Graf von Stauffenberg (15 November 1907 – 21 July 1944) was a German army officer who was one of the leading members of the failed 20 July plot of 1944 to assassinate Adolf Hitler and remove the Nazi Party from power. Along with Henning von Tresckow and Hans Oster, he was one of the central figures of the German Resistance movement within the Wehrmacht. For his involvement in the movement, he was executed by firing squad shortly after the failed attempt known as Operation Valkyrie.

In his youth, he and his brothers were members of the Neupfadfinder, a German Scout association and part of the German Youth movement.

Like his brothers, he was carefully educated and inclined toward literature, but eventually took up a military career.

Although Stauffenberg agreed with some of the Nazi Party's nationalistic aspects, he found many aspects of the Nazi Party's ideology repugnant and never became a member. Moreover, Stauffenberg remained a practicing Catholic. Stauffenberg vacillated between a strong personal dislike of Hitler's policies and a respect for what he perceived to be Hitler's military acumen. On top of this, the growing systematic ill-treatment of Jews and suppression of religion had offended Stauffenberg's strong personal sense of Catholic morality and justice. 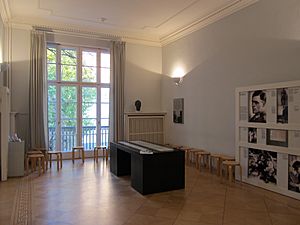 As early as September 1942 Stauffenberg was considering Hans Georg Schmidt von Altenstadt (), author of Unser Weg zum Meer, as a replacement for Hitler. From the beginning of September 1943 until 20 July 1944, Stauffenberg was the driving force behind the plot to assassinate Hitler and take control of Germany. His resolve, organisational abilities, and radical approach put an end to inactivity caused by doubts and long discussions on whether military virtues had been made obsolete by Hitler's behaviour. With the help of his friend Henning von Tresckow, he united the conspirators and drove them into action.

Stauffenberg was aware that, under German law, he was committing high treason. He openly told young conspirator Axel von dem Bussche in late 1943, "ich betreibe mit allen mir zur Verfügung stehenden Mitteln den Hochverrat..." ("I am committing high treason with all means at my disposal...."). He justified himself to Bussche by referring to the right under natural law ("Naturrecht") to defend millions of people's lives from the criminal aggressions of Hitler. 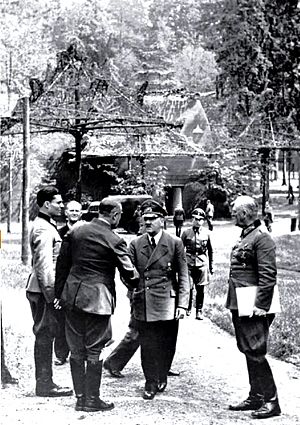 Only after the conspirator General Helmuth Stieff on 7 July 1944 had declared himself unable to assassinate Hitler on a uniforms display at Klessheim castle near Salzburg, Stauffenberg decided to personally kill Hitler and to run the plot in Berlin. By then, Stauffenberg had great doubts about the possibility of success. Tresckow convinced him to go on with it even if it had no chance of success at all, "The assassination must be attempted. Even if it fails, we must take action in Berlin", as this would be the only way to prove to the world that the Hitler regime and Germany were not one and the same and that not all Germans supported the regime.

After several unsuccessful tries by Stauffenberg to meet Hitler, Göring and Himmler when they were together, he went ahead with the attempt at Wolfsschanze on 20 July 1944. Stauffenberg entered the briefing room carrying a briefcase containing two small bombs. He left the room to arm the first bomb with specially adapted pliers, a task made difficult because he had lost his right hand and had only three fingers on his left.

A guard knocked and opened the door, urging him to hurry as the meeting was about to begin. As a result, Stauffenberg was able to arm only one of the bombs. He left the second bomb with his aide-de-camp, Werner von Haeften, and returned to the briefing room, where he placed the briefcase under the conference table, as close as he could to Hitler. Some minutes later, he excused himself and left the room. After his exit, the briefcase was moved by Colonel Heinz Brandt.

When the explosion tore through the hut, Stauffenberg was convinced that no one in the room could have survived. Although four people were killed and almost all survivors were injured, Hitler himself was shielded from the blast by the heavy, solid-oak conference table leg and was only slightly wounded.

Stauffenberg and Haeften quickly left and drove to the nearby airfield. When Joseph Goebbels announced by radio that Hitler had survived and later, after Hitler himself personally spoke on the state radio, the conspirators realized that the coup had failed. They were tracked to their offices and overpowered after a brief shoot-out, during which Stauffenberg was wounded in the shoulder.

Stauffenberg, his aide 1st Lieutenant Werner von Haeften, General Friedrich Olbricht, and Colonel Albrecht Mertz von Quirnheim were executed before 1:00 in the morning (21 July 1944) by a makeshift firing squad in the courtyard of the Bendlerblock, which was lit by the headlights of a truck. 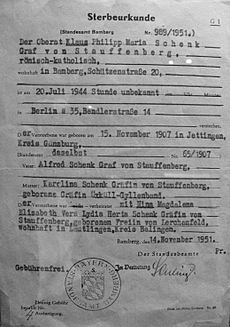 Stauffenberg was third in line to be executed, with Lieutenant von Haeften after. However, when it was Stauffenberg's turn, Lieutenant von Haeften placed himself between the firing squad and Stauffenberg, and received the bullets meant for Stauffenberg. When his turn came, Stauffenberg spoke his last words, "Es lebe das heilige Deutschland!" ("Long live our sacred Germany!") Others say the last words were: "Es lebe das geheime Deutschland!" ("Long live the secret Germany!") Fromm ordered that the executed officers (his former co-conspirators) receive an immediate burial with military honors in the Alter St.-Matthäus-Kirchhof in Berlin's Schöneberg district. The next day, however, Stauffenberg's body was exhumed by the SS, stripped of his medals and insignia, and cremated. Stauffenberg's family had already fled the country.

Hitler used the 20 July Plot as an excuse to destroy anyone he feared would oppose him. The traditional military salute was replaced with the Nazi salute also known as the Hitler salute. Eventually, over 20,000 Germans were killed or sent to concentration camps in the purge.

Stauffenberg married Nina Freiin von Lerchenfeld on 26 September 1933 in Bamberg. They had five children: Berthold; Heimeran; Franz-Ludwig; Valerie; and Konstanze, who was born in Frankfurt on the Oder after Stauffenberg's execution. Berthold, Heimeran, Franz-Ludwig and Valerie, who were not told of their father's deed, were placed in a foster home for the remainder of the war and were forced to use new surnames, as Stauffenberg was now considered taboo.

All content from Kiddle encyclopedia articles (including the article images and facts) can be freely used under Attribution-ShareAlike license, unless stated otherwise. Cite this article:
Claus Schenk Graf von Stauffenberg Facts for Kids. Kiddle Encyclopedia.