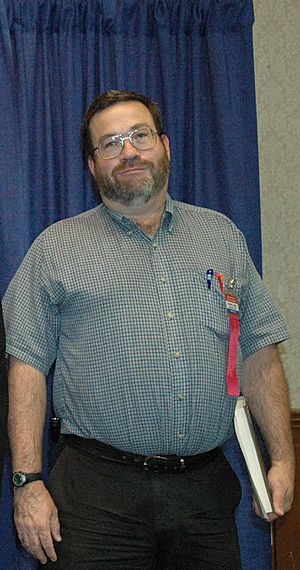 Clayton E. Cramer is an American historian, author, gun enthusiast, and software engineer. He played an important early role in documenting errors in the book Arming America by Michael A. Bellesiles, a book that was later proven to be based on fraudulent research. His work was cited by the United States District Court for the Northern District of Texas in United States v. Emerson, 46 F.Supp.2d 598 (N.D.Tex. 1999). His research also informed the Supreme Court decision in the Second Amendment cases District of Columbia v. Heller and McDonald v. Chicago. He holds an MA in history from Sonoma State University. He currently resides in Horseshoe Bend, Idaho, near Boise.

Cramer has written a regular column on gun owners' rights and related issues for Shotgun News. Clayton also manages an online blog titled ‘Civilian Gun Self-Defense Blog’ which records civilian use of firearms in self-defense through citing news articles across the nation. He also manages a personal website and personal blog which includes links to his books, journal articles, and other publications. Cramer's scholarly papers can be found on the Social Science Resource Network.

In 2008, Cramer ran for Idaho State Senator from District 22 as a Republican, but was defeated in the primary.

Besides his research and publications on gun owners' rights and American history, Cramer also has a strong personal interest in the treatment of the mentally ill. He is critical of the recent policy of making involuntary commitment of seriously mentally ill persons extremely difficult, and has researched and compiled a book explaining the origins of this policy and its present-day effects.

All content from Kiddle encyclopedia articles (including the article images and facts) can be freely used under Attribution-ShareAlike license, unless stated otherwise. Cite this article:
Clayton Cramer Facts for Kids. Kiddle Encyclopedia.