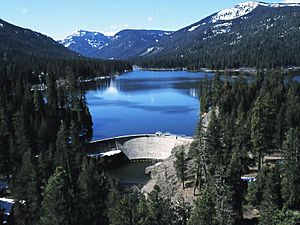 The concrete thin-arch dam was originally completed in 1915 by the United States Bureau of Reclamation at a height of 62 feet (19 m) and 404 feet (123 m) long at its crest. Raised another 21 feet (6.4 m) feet in 1918 to its present height of 83 feet (25 m) feet, it was partially rebuilt in 1964 then found structurally unsafe in 1990, when it was drained to less than 5% of its design capacity. The dam was reconstructed (with a new reinforcing gravity-dam element buttressing the original thin-arch structure) and refilled by popular demand.

The dam impounds the North Fork of the Tieton River, part of the Bureau's larger Yakima Project. Its use is now primarily recreational. Both dam and reservoir are owned and operated by the Bureau.

The reservoir it creates, Clear Lake, has a water surface of 260 acres (110 ha) and a capacity of 5,300 acre feet (6,500,000 m3). Recreation includes boating and fishing, and the site is surrounded by the southern tip of the Wenatchee National Forest. Also the YMCA of Yakima, Washington has Camp Dudley along its shores, a summer camp and retreat.

All content from Kiddle encyclopedia articles (including the article images and facts) can be freely used under Attribution-ShareAlike license, unless stated otherwise. Cite this article:
Clear Creek Dam (Washington) Facts for Kids. Kiddle Encyclopedia.