Clifton is a neighborhood east of downtown Louisville, Kentucky USA. Clifton was named because of its hilly location on the Ohio River valley escarpment. Clifton is bounded by I-64, N Ewing Ave, Brownsboro Road, and Mellwood Ave. 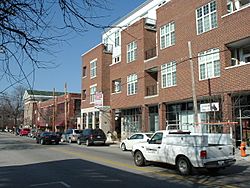 Unlike other Louisville neighborhoods, Clifton was developed over a period of 60 years, with the first homes built in the 1860s sitting next to homes built in the 1910s, although nearly all homes were built in Victorian styles. Its residential areas are also much less dense than other nearby areas like Butchertown or the Original Highlands. The Louisville and Lexington toll pike, which is now called Frankfort Avenue, went through the heart of the area and was lined with small shops.

The area began to revitalize in the 1990s, as numerous restaurants, boutiques, and antique shops opened up along Frankfort Avenue. Area attractions include the Kentucky School for the Blind and the American Printing House for the Blind. 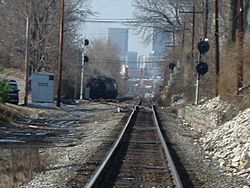 View of Downtown Louisville from railroad tracks in Clifton

All content from Kiddle encyclopedia articles (including the article images and facts) can be freely used under Attribution-ShareAlike license, unless stated otherwise. Cite this article:
Clifton, Louisville Facts for Kids. Kiddle Encyclopedia.