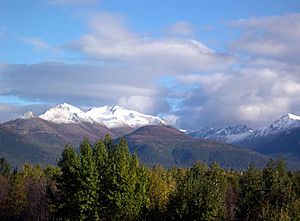 First winter snowfall on the Chugach Mountains in September 2005

Anchorage, Alaska has a subarctic climate with the code Dfc according to the Köppen climate classification due to its short, cool summers. Average daytime summer temperatures range from approximately 55 to 78 °F (12.8 to 25.6 °C); average daytime winter temperatures are about 5 to 30 °F (−15.0 to −1.1 °C). Anchorage has a frost-free growing season that averages slightly over one hundred days.

The weather on any given day and indeed for entire seasons can be very unpredictable. Some winters feature several feet of snow and cold temperatures, while others like that of 1976–77 (in the January of which Anchorage amazingly averaged 2.7 °F or 1.5 °C warmer than Atlanta almost 30 degrees closer to the equator), just a foot or two of snow and frequent thaws, which put dangerous ice on the streets.

Due to its proximity to active volcanoes, ash hazards are a significant, though infrequent, occurrence. The most recent notable incident was an August, 1992 eruption of Mt. Spurr, which is located 78 miles west of the city. The eruption deposited about 3 mm of volcanic ash on the city. The clean-up of ash resulted in excessive demands for water and caused major problems for the Anchorage Water and Wastewater Utility.

Because of Anchorage’s latitude, summer days are very long and winter daylight hours are very short. Anchorage is often cloudy during the winter, which decreases the amount of sunlight experienced by residents.

All content from Kiddle encyclopedia articles (including the article images and facts) can be freely used under Attribution-ShareAlike license, unless stated otherwise. Cite this article:
Climate of Anchorage, Alaska Facts for Kids. Kiddle Encyclopedia.