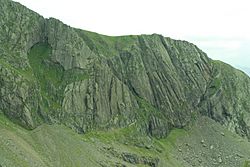 Clogwyn Du'r Arddu (Welsh pronunciation: [ˈklɔɡwɨ̞n ˈdɨːr ˈarðɨ̞]), on the north flank of Snowdon, is considered by many to be one of the best climbing cliffs in Britain. It is north-facing and comparatively remote (700 m or 2,300 ft above sea level). It lends its name to Clogwyn station on the Snowdon Mountain Railway which overlooks it. "Clogwyn Du'r Arddu" translates as "Dark, Black Cliff".

Climbers who have contributed to the many high-quality routes on the cliff include John Streetly, Jack Longland, Ron James, Colin Kirkus, Joe Brown, Don Whillans, Fred Pigott and Johnny Dawes.

The first recorded climb on the cliff was the 1798 ascent of the Eastern Terrace by Peter Bailey Williams and William Bingley, botanists looking for alpine plants. The latter wrote:

I believe it was the prospect downwards that determined us to brave every difficulty. It happened fortunately that the steep section immediately above us was the only one that presented any material danger. Mr Williams, having a pair of strong shoes with nails in them, which would hold their footing better than mine, requested to make the first attempt, and after some difficulty he succeeded … When he had fixed himself securely to a part of the rock, he took off his belt, and holding it firmly by one end, gave the other to me: I laid hold, and, with a little aid from the stones, fairly pulled myself up by it. After this we got on pretty well, and in about an hour and a quarter from the commencement of our labour, we found ourselves upon the brow of this dreadful precipice, and in possession of all the plants we expected to find.

The north facing cliff is regarded as the premier high-grade traditional mountaineering crag in the United Kingdom. Clogwyn Du'r Arddu combines the steepness, size, seriousness and quality of rock which it shares with the likes of Carn Dearg on Ben Nevis, but unlike the Scottish cliff maintained a continuous record of having the most difficult climbs from the 1930s to the 2000s.

The cliff has attracted leading climbers of many eras, from the Abrahams through Kirkus, Harding, Brown, Whillans, Crew, Edwards, Ward-Drummond, Redhead and finally Dawes. No other cliff has a comparable sequence of serious climbs.

All content from Kiddle encyclopedia articles (including the article images and facts) can be freely used under Attribution-ShareAlike license, unless stated otherwise. Cite this article:
Clogwyn Du'r Arddu Facts for Kids. Kiddle Encyclopedia.