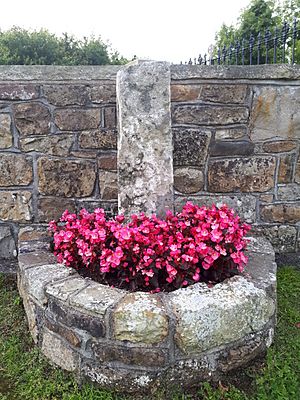 It is the only Ogham inscribed stone to be recorded in County Leitrim. First examined by Mac Neill in 1909, the stone then marked the Kellagher family burial plot "opposite the middle of the eastern gable of the ruin" of Cloonmorris church. The c. 0.85m long stone dates to c. 400 – c. 550, has an ecclesiastical association, and is not definitely post-apocope.

MacNeill thought the stone was probably the memorial of one Qenuvin-dagnas (Irish: Ceanannán, Ceannán). In Wales the name Qennovindagni occurs on a British-Latin inscription at Parcau near Whitland in Carmarthenshire, and is believed to identify a person of Gaelic, rather than Brythonic, origin. Scholars noted the Cloonmorris is "hardly a stone's throw from the boundary" between Longford and Leitrim, the stone standing inside the historic Conmhaícne territory once separating the Kingdom of Meath from Connacht.

In 1978 the stone was moved and enclosed on a pedestal near the churchyard entrance, but in doing so was placed into an inverted (top-down) position.

All content from Kiddle encyclopedia articles (including the article images and facts) can be freely used under Attribution-ShareAlike license, unless stated otherwise. Cite this article:
Cloonmorris Ogham stone Facts for Kids. Kiddle Encyclopedia.