Co-Cathedral of Saint Theresa of the Child Jesus (Honolulu, Hawaii) facts for kids 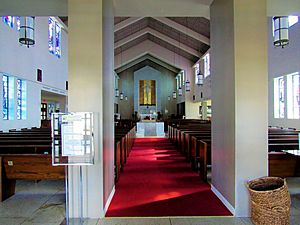 The original church parish was established in 1931 by Msgr. Stephen Alencastre, Vicar Apostolic of the Hawaiian Islands. Construction was completed only a year later, in September 1932. Reflecting the growth of Catholicism in the immediate community, then pastor and diocesan vicar general Msgr. Benedict Vierra led a major fundraising effort to replace the church's wooden structure, showing signs of deterioration in 1956. Vierra's efforts were successful and the renovated church was dedicated on August 15, 1963.

Having found a need to have a larger space for pontifical liturgies - since the Cathedral Basilica of Our Lady of Peace had become too small to accommodate the increased population since the vicariate apostolic was elevated to a diocese - Bishop Joseph Ferrario petitioned Pope John Paul II in 1984 to elevate Saint Theresa church to the dignity of a co-cathedral, as it is larger in physical size as a church than the principal Cathedral Basilica of Our Lady of Peace. A papal decree elevating Saint Theresa Catholic Church to co-cathedral was issued and the church was consecrated on July 28, 1985. Its interior was reconfigured and a second cathedra for the bishop was placed in the church.

The Co-Cathedral of Saint Theresa of the Child Jesus is most often used for pontifical liturgies such as the annual Mass of the Chrism during which the holy oils (oil of the sick, oil of catechumens, and the holy Chrism) used in several of the sacraments are consecrated by the bishop before being distributed to the parishes of the diocese. Ordinations and episcopal installations are sometimes celebrated at the co-cathedral.

All content from Kiddle encyclopedia articles (including the article images and facts) can be freely used under Attribution-ShareAlike license, unless stated otherwise. Cite this article:
Co-Cathedral of Saint Theresa of the Child Jesus (Honolulu, Hawaii) Facts for Kids. Kiddle Encyclopedia.