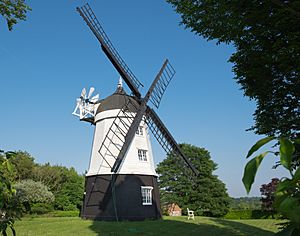 Cobstone Mill was built around 1816 and is located on Turville Hill in the civil parish of Ibstone in Buckinghamshire, England, and overlooks the village of Turville. It is sometimes referred to as Turville Windmill. It is a smock mill that replaced the original mill that had stood there since the 16th century. The machinery was previously used in another mill in the village of Lacey Green.

It was a working mill grinding cereal until 1873. Later, squatters living in the mill caused a fire which damaged the centre post. After this time the mill went further into deterioration. In 1967 during the filming of Chitty Chitty Bang Bang that the mill was cosmetically restored. The cap was remolded, a new fantail and light wooden sails were added.

The mill and cottage were purchased in 1971 by Hayley Mills and her first husband Roy Boulting, and extensive conversions and remodelling of the interiors were completed as well as interior and exterior restoration and conversion of the mill. The cottage also has a swimming pool. The property was sold a few years later and has been in private possession since.

The mill has been used as a film location in other films and TV programmes including:

All content from Kiddle encyclopedia articles (including the article images and facts) can be freely used under Attribution-ShareAlike license, unless stated otherwise. Cite this article:
Cobstone Windmill Facts for Kids. Kiddle Encyclopedia.