The Columbia Glacier, a glacier in Prince William Sound on the south coast of the U.S. state of Alaska, is one of the fastest moving glaciers in the world, and has been retreating since the early 1980s. It was named after Columbia University, one of several glaciers in the area named for elite U.S. colleges by the Harriman Alaska Expedition in 1899.

The Alaska Marine Highway vessel M/V Columbia is named after the Columbia Glacier. 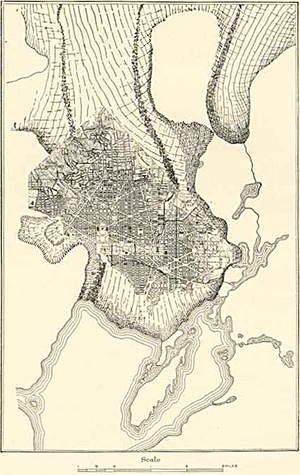 An illustration of Columbia Glacier in 1910, with the District of Columbia overlaid for scale comparisons

The glacier twists its way through western Alaska's Chugach Mountains. The bald streak at the bottom of the mountains, called the trimline, shows this glacier has lost 1,300 feet (400 m) of thickness. It has also retreated 10.5 miles (16.9 km) since that measurement was taken.

The glacier's speed of retreat at the terminus reached a maximum of nearly 30 metres (98 ft) per day in 2001, when it was discharging icebergs at approximately 7 cubic kilometres (1.7 cu mi) per year; the glacier has subsequently slowed down, resulting in an increase in retreat rate. The terminus has retreated a total of 16 kilometres (9.9 mi) at an average rate of approximately 0.6 kilometres (0.37 mi) per year since 1982. The retreat has been accompanied by nearly 500 metres (1,600 ft) of thinning at the present position of the terminus. In the next few decades it is expected to retreat another 15 kilometres (9.3 mi), to a point where the bed of the glacier rises above sea level. Columbia Glacier's retreat should be completed around 2020. Tidewater glacier advance and retreat is not directly forced by climate (adjacent tidewater glaciers may be simultaneously advancing and retreating), but rapid retreat appears to be triggered by climate-forced long-term thinning.

All content from Kiddle encyclopedia articles (including the article images and facts) can be freely used under Attribution-ShareAlike license, unless stated otherwise. Cite this article:
Columbia Glacier (Alaska) Facts for Kids. Kiddle Encyclopedia.