Liothula omnivora, the common bag moth, is a psychid moth endemic to New Zealand. Māori names for bagworms include pū a Raukatauri meaning 'flute of Raukatauri', the goddess of music; whare atua meaning 'house of the spirit'; or kopi meaning 'shut'.

There are over 50 species of Psychidae and at least two species of Liothula in New Zealand.

This species was described by Richard William Fereday in 1878. In 1928 George Hudson placed this species within the Oeceticus genus and amended its epithet to omnivorous. However this was not accepted by other taxonomists. 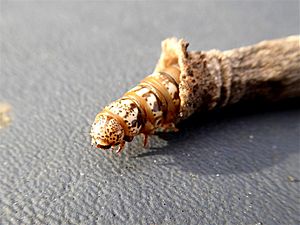 The exterior of the bag is often decorated with small leaf and bark fragments. The quantity and placement of these fragments indicates the sex of the caterpillar - females have few fragments and mostly placed towards the narrow end of the bag, whilst males attach many fragments along the length of the bag.

The caterpillar itself has a black or brown and white speckled head and thorax, with the remainder of the body being plain brown. Female caterpillars grow larger, with the average bag of pupal females measuring 45 mm compared to pupal male bags averaging 42 mm.

As the scientific name suggests, the caterpillars of L. omnivora feed on a very wide range of native and exotic broad-leaved and coniferous shrubs and trees, which they feed on at night. They feed on the foliage, but may occasionally constrict twigs so tightly that sap flow is restricted and gall-like swellings occur.

Pupation usually occurs during winter. When ready to pupate, L. omnivora permanently secures the bag to a twig using a wide band of silk or to larger surfaces by a mat of many short lengths of silk. They then close both ends and add an extra lining of silk to the interior, and then pupate within the bag.

Only the male metamorphoses into a recognisable moth. The adult female never leaves the bag and has no wings, merely an abdomen and rudimentary head and thorax. 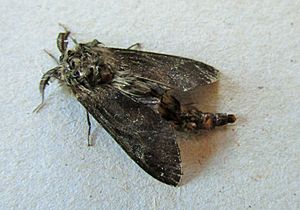 The male is a hairy, black moth with translucent wings and a tapered abdomen and a 28–38 mm wingspan.

Males usually emerge from the pupa in the early morning. When ready to emerge, the male pupa forces its way to the narrow exit of the bag and extends the front part of the body through the hole. Held in place by spines on the abdomen, the pupa then splits and the adult male emerges. He then clings to the bag while the wings expand and harden. When mating, the male inserts the telescopic end of his abdomen through the narrow end of the female's bag. She lays her eggs within the bag and dies. The caterpillars emerge through the narrow end of the female's bag and disperse via crawling, lowering themselves on silk threads or by wind.

Tachinids, primarily Pales feredayi and P. marginata, lay their eggs on foliage which are then ingested by the bagworm caterpillar. The maggots then eat through the gut wall and feed on the caterpillar, leaving the host's body when it dies and pupating within the bag. Remains of the grubs and their brown puparia are often found inside cases, alongside the remains of the caterpillar. The tachinid larvae are in turn eaten by another parasitoid wasp, which bites small, round emergence holes in the side of the bag.

Parasitoid ichneumonid wasps known to attack L. omnivora include the white-spotted ichneumonid Ecthromorpha intricatoria (Fereday), Xanthopimpla rhopaloceros (Krieger) and Paraphylax species. E. intricatoria parasitises various Lepidopteran pupae, but the adult is unable to escape from the bag of L. omnivora. X. rhopaloceros was released in New Zealand in the 1960s as a biocontrol agent against the light brown apple moth but was not sufficiently host-specific to have much impact.

All content from Kiddle encyclopedia articles (including the article images and facts) can be freely used under Attribution-ShareAlike license, unless stated otherwise. Cite this article:
Common bag moth Facts for Kids. Kiddle Encyclopedia.