The common side-blotched lizard (Uta stansburiana) is a species of side-blotched lizard in the family Phrynosomatidae. The species is native to dry regions of the western United States and northern Mexico. It is notable for having a unique form of polymorphism wherein each of the three different male morphs utilizes a different strategy in acquiring mates. The three morphs compete against each other following a pattern of rock paper scissors, where one morph has advantages over another but is outcompeted by the third.

The specific epithet, stansburiana, is in honor of Captain Howard Stansbury of the US Corps of Topographical Engineers, who collected the first specimens while leading the 1849-1851 expedition to explore and survey the Great Salt Lake of Utah. 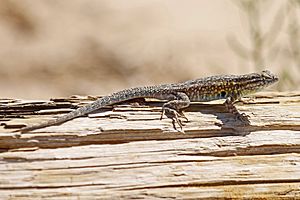 A distinguishing feature of this species is the dark blotch behind the front leg. The blotch is generally less prominent in females than in this male.

The systematics and taxonomy of the widespread and variable lizards of the genus Uta is much disputed. Countless forms and morphs have been described as subspecies or even distinct species. 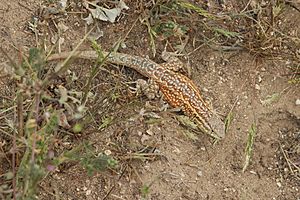 The common side-blotched lizard is a species of small iguanid lizard. Males can grow up to 60 mm (2.4 inches) from snout to vent, while females are typically a little smaller. The degree of pigmentation varies with sex and population. Some males can have blue flecks spread over their backs and tails, and their sides may be yellow or orange, while others may be unpatterned. Females may have stripes along their backs/sides, or again may be relatively drab. Both sexes have a prominent blotch on their sides, just behind their front limbs. Coloration is especially important in common side-blotched lizards, as it is closely related to the mating behavior of both males and females.

Male side-blotched lizards exhibit distinct polymorphism in their throat colors, and can be divided into three different categories. Each of these three different morphs varies in how it competes for mates, and variation within a breeding population is maintained by a rock paper scissors mechanism of frequency-dependent sexual selection. A cycle is created where the least common morph of one breeding season often has the largest number of mature living offspring in the next year. This is because one morph does particularly well against another, but poorly in comparison to the third.

Female side-blotched lizards have also been shown to exhibit behaviorally correlated differences in throat coloration. Orange-throated females are considered r-strategists. They typically produce large clutches consisting of many small eggs. In contrast, yellow-throated females are K-strategists that lay fewer, larger eggs. Like the male morphs, the frequencies of these two female morphs also cycle with time. However, the cycle is shorter – two years in comparison to the male morphs’ four- or five-year cycle – and is not a result of frequency-dependent sexual selection. Instead, orange-throated females are more successful at lower population densities, where competition for food is less fierce and less selection pressure from predation occurs. When population density is high and or when predators abound, yellow-throated females tend to have higher reproductive success. In general, their larger hatchlings have higher short-term and long-term survival rates, and these advantages are magnified in times of scarcity. Side-blotched lizards show displays and aggression shortly after hatching, and even minute differences in size can lead to increased social dominance and capacity to outcompete the smaller hatchlings.

Throat color in side-blotched lizards is genetically determined, and has high heritability. It is determined by a single Mendelian factor with three alleles. In males, the o allele is the dominant allele, and the b allele is recessive to the y allele. Therefore, phenotypically orange-throated males have genotypes of either oo, ob, or oy. Yellow-throated males have genotypes of either yy or yb, and blue-throated males are exclusively bb. In females, all individuals with the dominant o allele are orange-throated, while those lacking an o allele develop yellow throats. 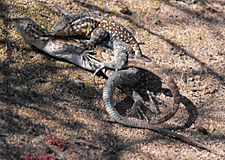 Female side-blotched lizards lay clutches with an average of 5.1 eggs and a maximum of 9 eggs in a single clutch. Smaller clutch sizes, often associated with yellow-throated females, have an increased frequency of eggs bursting upon being laid or egg binding, suggesting an upper physiological limit to how much a female can invest in each individual egg she lays.

Dominant male side-blotched lizards are aggressive in the defense of their territories. Upon spotting another conspecific within their territories, resident individuals enter a state of heightened alertness. They perform one or more “pushups” (vertical bobbing motions), arch their backs, and extend their limbs before approaching the intruder. If the intruder is another male, the resident follows up by rushing, butting, or nipping at the intruder, which will then usually proceed to run away. If it is a female, the resident will initiate courtship, which consists of circling, flank-biting, licking, smelling, shallower head-bobbing, and eventually copulation. Body shape and passivity are the main releasers for courtship activity, and males have been observed in trying to court and copulate with smaller lizards of other species, as well as smaller subordinate side-blotched lizards.

Tail length is important in the determination of dominance hierarchies. Like many other lizard species, side-blotched lizards use tail autotomy as an escape mechanism. However, a reduction in tail length also confers a loss of social status for both males and females. Males will autotomize their tails less readily than will females, likely due to the increased importance of social status for males. Subordinate females can still mate, but male reproductive success is directly tied to their social status.

Side-blotched lizards display feeding behavior which can be influenced by sex or season. In a study conducted by Best et al.., these lizards were found to consume diets largely based upon arthropod populations within the area, within a given season. These populations vary by year, and different arthropod populations will fluctuate seasonally. The study showed a correlation between sex and diet, giving way to a number of theories that speculate why gender has an effect on feeding behavior and diet. One mechanism proposes the behavior differences depend on gender, such as guarding territories and attracting mates, are responsible for, or a contributing factor in, feeding behavior. Alternatively, the sexual difference in feeding behavior could also act in favor of reducing intraspecific competition for resources, with individuals eating prey appropriate for their respective size (ex. small females consuming smaller prey).

The "rock-paper-scissors" mating strategy is a genetically-based male polymorphism that has been maintained over millions of years throughout many populations of side-blotched lizard in the United States and Mexico. However, speciation has resulted from the formation of reproductive isolation between populations when a population loses of one or more of the male morphologies. However, speciation due to the loss of a male morph has occurred when populations lose one or more male morphs and become reproductively isolated from populations with the ancestral polymorphism. For side-blotched lizards, the morph lost most commonly is the sneaker male. In other cases, speciation has occurred as a result of hybridization between morphs occurring in response to rapid changes in the environment .

The loss of a male morph can change selection on the remaining morphs.  In side-blotched lizards, for example, female mate preferences change after the loss of a male morph, and alleles that once allowed other male morphs to outcompete the lost morph for mates are no longer as beneficial. These shifts in selection often lead to greater sexual size dimorphism. Larger male and female size regularly follow the loss of a polymorphism, as seen in the side-blotched lizards. Predator-prey dynamic also change after a male morph is lost, with predators evolving to prey on the remaining morphologies.

Like most animals, side-blotched lizards are infected by a variety of parasites. Intestinal parasites include nematodes and cestodes. Blood parasites include members of the Apicomplexa such as Schellackia occidentalis and species of Lankesterella. The tegument is infected by several species of mites. Parasites can alter metabolism and reproductive success of side-blotched lizards due to body temperature changes in response to fighting the infection.

All content from Kiddle encyclopedia articles (including the article images and facts) can be freely used under Attribution-ShareAlike license, unless stated otherwise. Cite this article:
Common side-blotched lizard Facts for Kids. Kiddle Encyclopedia.