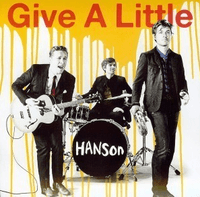 Hanson's "Give a Little" as promo-CD-single

A CD single (sometimes abbreviated to CDS) is a music single in the form of a standard size compact disc. It is not to be confused with the Mini CD single, which uses a smaller form factor and is also refered as merely CD Single in some occasion. The format was introduced in the mid-1980s but did not gain its place in the market until the early 1990s. With the rise in digital downloads in the 2000s, sales of CD singles have decreased.

Commercially released CD singles can vary in length from two songs (an A side and B side, in the tradition of 7" 45rpm records) up to six songs like an EP. Some contain multiple mixes of one or more songs (known as remixes), in the tradition of 12" vinyl singles, and in some cases, they may also contain a music video for the single itself as well as a collectible poster. Depending on the nation, there may be limits on the number of songs and total length for sales to count in singles charts.

Dire Straits' "Brothers in Arms" (1985) is reported to be the world's first CD single, issued in the UK in two separate singles as a promotional item, one distinguished with a logo for the tour, Live in '85, and a second to commemorate the Australian leg of the tour marked Live in '86. Containing four tracks, it had a very limited print run. CD singles were first made eligible for the UK Singles Chart in 1987, and the first number 1 available on the format in that country was "I Wanna Dance with Somebody (Who Loves Me)" by Whitney Houston in May 1987.

The Mini CD single format was originally created for use for singles in the late 1980s, but met with limited success, particularly in the US. The smaller CDs were more successful in Japan and have recently become more common in Europe, marketed as "Pocket" CD's for being small enough to fit in a shirt pocket. By 1989, the CD3 was in decline in the US (replaced by the 5-inch CD single, called CD-5).

It was common in the 1990s for US record companies to release both a two-track CD and a multi-track (usually "remix") maxi CD. In the UK, record companies would also release two CDs but, usually, these consisted of three tracks or more each.

During the 1990s, CD single releases became less common in certain countries and were often released in smaller editions, as the major record labels feared they were cannibalizing the sales of higher-profit-margin CD albums. Pressure from record labels made singles charts in some countries become song charts, allowing album cuts to chart based only on airplay, without a single ever being released. In the US, the Billboard Hot 100 made this change in December 1998, after which very few songs were released in the CD single format in the US, but they remained extremely popular in the UK and other countries, where charts were still based solely on single sales and not radio airplay. At the end of the 1990s, the CD was the biggest-selling single format in the UK, but in the US, the dominant single format was airplay. With the advent of digital music sales, the CD single has largely been replaced as a distribution format in most countries, and most charts now include digital download counts as well as physical single sales.

In Australia, the Herald Sun reported the CD single is "set to become extinct". In early July 2009, leading music store JB Hi-Fi ceased stocking CD singles because of declining sales, with copies of the week's No. 1 single often selling as few as only 350 copies across all their stores nationwide. While CD singles no longer maintain their own section of the store, copies are still distributed but placed with the artist's albums. "On a Mission" by Gabriella Cilmi was the last CD single to be stocked in Kmart, Target and Big W, who then concluded stocking newly released singles. Sanity Entertainment, having resisted the decline for longer than the other major outlets, has also ceased selling CD singles.

In China, CD single releases have been traditionally less common, and most of the time album cuts chart based only on airplay, but the charts also occasionally include digital download counts because of the amount of pirating and illegal file sharing over the internet.

In Greece and Cyprus, the term "CD single" is used to describe an extended play (EP) in which there may be anywhere from three to six different tracks. These releases charted on the Greek Singles Chart (before it abandoned tracking altogether) with songs released as singles.

In September 2003, there was talk of ringtones for mobile phones outstripping CD singles sales for the year 2004.

Woolworths Group, which previously accounted for one third of all CD sales in the country, stopped selling CD singles in August 2008, citing the "terminal decline" of the format as customers moved to digital downloads as their preferred method of purchasing single tracks.

All content from Kiddle encyclopedia articles (including the article images and facts) can be freely used under Attribution-ShareAlike license, unless stated otherwise. Cite this article:
Compact Disc single Facts for Kids. Kiddle Encyclopedia.