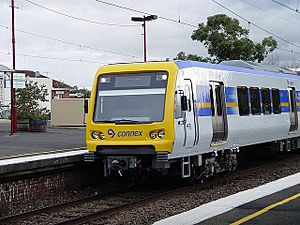 Connex was a train operator in Melbourne, Australia. They ran all Melbourne railway lines, and took over all M-Train services on April 16, 2003, however Metro Trains Melbourne took over all Connex's services on November 30, 2009. All Connex services used the Metcard fare system.

All content from Kiddle encyclopedia articles (including the article images and facts) can be freely used under Attribution-ShareAlike license, unless stated otherwise. Cite this article:
Connex Melbourne Facts for Kids. Kiddle Encyclopedia.