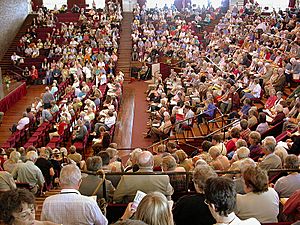 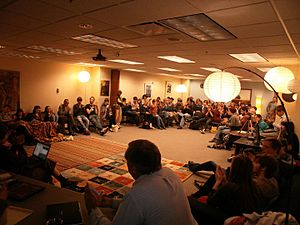 Members of the Shimer College Assembly reaching a consensus through deliberation.

Consensus decision-making is a group decision-making process in which group members develop, and agree to support a decision in the best interest of the whole. Consensus may be defined professionally as an acceptable resolution, one that can be supported, even if not the "favourite" of each individual. Consensus is defined by Merriam-Webster as, first, general agreement, and second, group solidarity of belief or sentiment. It has its origin in the Latin word cōnsēnsus (agreement), which is from cōnsentiō meaning literally feel together. It is used to describe both the decision and the process of reaching a decision. Consensus decision-making is thus concerned with the process of deliberating and finalizing a decision, and the social, economic, legal, environmental and political effects of using this process. 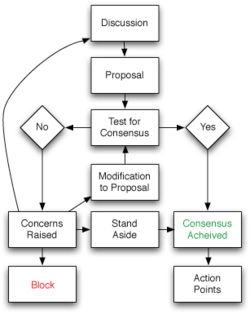 Consensus decision-making is an alternative to commonly practiced group decision-making processes. Robert's Rules of Order, for instance, is a guide book used by many organizations. This book allows the structuring of debate and passage of proposals that can be approved through majority vote. It does not emphasize the goal of full agreement. Critics of such a process believe that it can involve adversarial debate and the formation of competing factions. These dynamics may harm group member relationships and undermine the ability of a group to cooperatively implement a contentious decision. Consensus decision-making attempts to address the beliefs of such problems. Proponents claim that outcomes of the consensus process include:

In groups that require unanimous agreement or consent (unanimity) to approve group decisions, if any participant objects, they can block consensus according to the guidelines described below. These groups use the term consensus to denote both the discussion process and the decision rule. Other groups use a consensus process to generate as much agreement as possible, but allow participants to finalize decisions with a decision rule that does not require unanimity. In this case, someone who has a strong objection must live with the decision.

All content from Kiddle encyclopedia articles (including the article images and facts) can be freely used under Attribution-ShareAlike license, unless stated otherwise. Cite this article:
Consensus Facts for Kids. Kiddle Encyclopedia.