Cophixalus zweifeli is a species of frog in the family Microhylidae. It is endemic to northern Queensland, Australia, and only known from the area of its type locality in the Cape Melville National Park. The species was named to honour American herpetologist Richard G. Zweifel. Common name Zweifel's frog has been coined for it. It is one of the five northeast Australian Cophixalus species that are specialized in boulder field habitats. 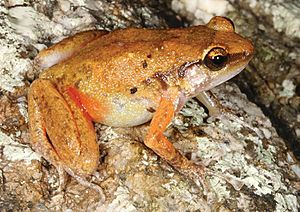 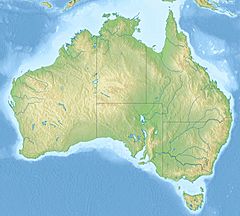 Adult males measure 36–38 mm (1.4–1.5 in) and adult females 40–49 mm (1.6–1.9 in) in snout–vent length. The snout is elongated, truncated in dorsal view and straight, slightly projecting laterally. The tympanum is large but obscured dorsally. Fingers II–IV have greatly enlarged, truncated discs. The toe discs are also enlarged but smaller than those of the fingers. The dorsum is tan with some darker brown spots. A dark canthal stripe runs from the tip of the snout to slightly beyond the tympanum.

The male advertisement call is a single high-pitched "yelp" composed of hundreds of fine pulses.

In the past, logging was a threat to this species. At present, a more likely threat is habitat degradation caused by increased visitation to the Cape Melville National Park.

All content from Kiddle encyclopedia articles (including the article images and facts) can be freely used under Attribution-ShareAlike license, unless stated otherwise. Cite this article:
Cophixalus zweifeli Facts for Kids. Kiddle Encyclopedia.