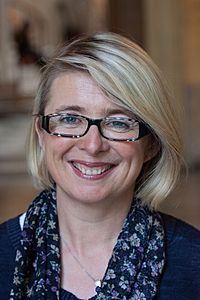 Corinne Erhel (3 February 1967 – 5 May 2017) was a French politician. Erhel joined the Socialist Party. In 1997, she became assistant parliamentarian for Alain Gouriou, deputy mayor of Lannion. She served as a member of the National Assemby from 2007 to 2017, where she represented the Côtes-d'Armor department. She was born in Quimper, Finistère.

Erhel died at the age of 50 on 5 May 2017 of a heart attack while she was giving a speech in Plouisy, Côtes d'Armor at a meeting in support of Emmanuel Macron for the 2017 French presidential election.

All content from Kiddle encyclopedia articles (including the article images and facts) can be freely used under Attribution-ShareAlike license, unless stated otherwise. Cite this article:
Corinne Erhel Facts for Kids. Kiddle Encyclopedia.