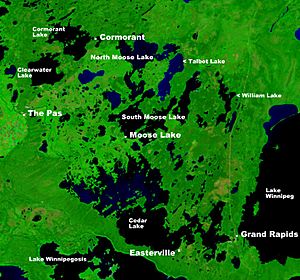 NASA image of Cormorant Lake northeast of The Pas

Cormorant Lake is a large lake in northern Manitoba, Canada. Administratively it is in Division 21, Northern Region of Manitoba, and almost entirely within the Cormorant Provincial Forest. The lake is about 21.15 kilometres (13 mi) wide and 64.23 kilometres (40 mi) long, with a surface area of over a 1,000 square kilometres (386 sq mi). There is one village and two hamlets on the east side of the lake along Via Rail's Winnipeg – Churchill rail line, the village of Cormorant and the hamlets Halcrow and Dering. The Cormorant Lake Airport is between Cormorant and Dering. It is the former site of a military base. It is now closed. There is one hamlet to the south of the lake, Budd, which is also on the rail line. The lake can be reached by road on Provincial Road 287 from just north of The Pas.

Cormorant Lake is in the Saskatchewan River basin and is primarily fed from the northeast from Mitchell Lake and Yawningstone Lake, and from the Southwest from Clearwater Lake and exits to the southeast into Moose Lake. There are two large islands in the western portion of the lake, and a chain of islands cutting northeast–southwest across the middle of the lake.

All content from Kiddle encyclopedia articles (including the article images and facts) can be freely used under Attribution-ShareAlike license, unless stated otherwise. Cite this article:
Cormorant Lake (Manitoba) Facts for Kids. Kiddle Encyclopedia.