Corn Exchange, Manchester is a grade II listed building in Manchester, England. The building was originally used as a corn exchange and was previously named the Corn & Produce Exchange, and subsequently The Triangle. Following the IRA bomb in 1996 it was renovated and was a modern shopping centre till July 2014. The building was recently sold to Aviva investors and has been re-developed into a dining destination with 17 food outlets. 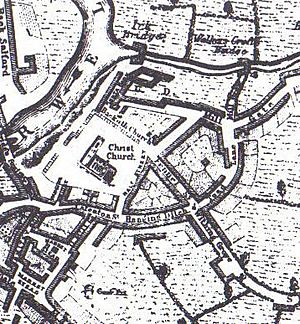 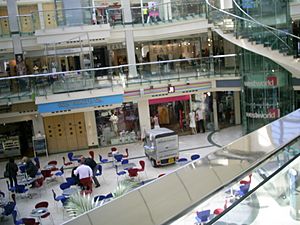 The first Corn Exchange built on this site in 1837 was designed by Richard Lane. This was demolished in 1897 and replaced in two sections between 1897 and 1903. Each section was designed by a different architect Before 1837 it traded from Hanging Ditch. In its heyday, 'The Corn & Produce Exchange', was the gathering spot for thousands of traders from all over the region. This continued until the economic depression of the 1920s and 1930s. Following the Second World War, trade gradually declined and the trading floor fell into disuse.

The building was used briefly by the Royal Exchange Theatre Company from 1976. It also served as a filming location for Granada Television's Brideshead Revisited.

From approximately this period until 1996 it became a gathering place for alternative communities and contained a large market with small stallholders selling clothes, jewellery and piercing paraphernalia, and second hand record shops. Many of the shops were temporary structures on the trading floor of the exchange, with other shops operated from permanent units and offices around the perimeter. One of the most well known shops was Golden Dawn Books, ran by Barry Bender, who was injured in the IRA bomb. There was also a small cafe in a basement area to the northeast of the ground floor. The exterior of the building also housed many shops in a basement area, including Harry Hall Cycles.

After being heavily damaged by the 1996 bomb many of these businesses were forced to move to new premises, mostly in the north of the city, where many foundered. The Corn Exchange was renovated and reopened as the Triangle Shopping Centre (because of its shape). Most of the Edwardian interior was replaced by high-class retail outlets including MUJI, a flagship Adidas store, O'Neill and Jigsaw, all of which have now closed.

In 2005, The Norwich Property Trust, the largest authorized commercial property unit trust in the UK, acquired the Triangle for £67m from American property company the Blackstone Group and its UK-based partners Milligan.

In 2012, 'The Triangle' was relaunched as 'Corn Exchange, Manchester'. Plan were revealed to convert the building into a food outlet and a hotel In August 2014 work commenced by a demolition company to strip out modern interior materials and fixtures, some of which were being offered for reuse as salvage and reclamation, prior to recycling or landfill. The food outlet opened in 2015 and a hotel is also planned for the site.

All content from Kiddle encyclopedia articles (including the article images and facts) can be freely used under Attribution-ShareAlike license, unless stated otherwise. Cite this article:
Corn Exchange, Manchester Facts for Kids. Kiddle Encyclopedia.