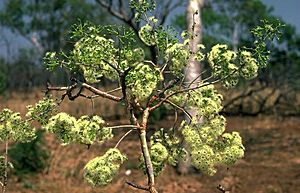 Corymbia confertiflora, commonly known as the broad-leaved carbeen or the rough leaf cabbage gum, is a species of tree that is endemic to northern Australia. It has rough, tessellated bark near the base of the trunk, smooth white to pale grey bark above, a crown of both intermediate and adult leaves, large numbers of flower buds borne on leafless sections of branchlets in groups of seven, creamy white flowers and cylindrical to barrel-shaped or bell-shaped fruit.

The broad-leaved carbeen was first formally described in an 1859 manuscript by Ferdinand von Mueller who gave it the name Eucalyptus floribunda. The name E. floribunda was already in use (now Angophora floribunda) and when Richard Kippist entered Mueller's description in the Journal of the Proceedings of the Linnean Society, Botany, he changed the name to E. confertiflora. Under the rules of botanical nomenclature, the name is therefore attributed to Kippist, even though Mueller supplied the description. In 1995 Kenneth Hill and Lawrence Alexander Sidney Johnson changed the name to Corymbia confertiflora in the journal Telopea. The specific epithet (confertiflora) is derived from the Latin confertus meaning "crowded" and -florus meaning "-flowered", referring to the crowded flowers.

Corymbia confertiflora is widespread in northern Australia and occurs from the Kimberley region of Western Australia, through the Top End of the Northern Territory and south-eastern Arnhem Land, then near-coastal areas around the Gulf of Carpentaria to near Townsville and the Kennedy River in Queensland. It grows in open woodland and forest on plains and levees, and is often associated with limestone.

All content from Kiddle encyclopedia articles (including the article images and facts) can be freely used under Attribution-ShareAlike license, unless stated otherwise. Cite this article:
Corymbia confertiflora Facts for Kids. Kiddle Encyclopedia.