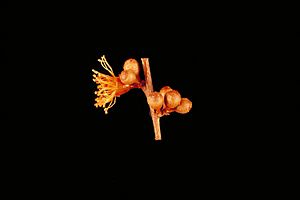 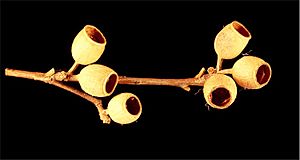 Corymbia ferriticola, commonly known as the Pilbara ghost gum, is a species of tree or a mallee that is endemic to Western Australia. It has smooth bark, lance-shaped adult leaves, flower buds in groups of seven, creamy white flowers and shortened spherical to cylindrical fruit.

Pilbara ghost gum was first formally described in 1986 by Ian Brooker and Walter Edgecombe in the journal Nuytsia and was given the name Eucalyptus ferriticola. In 1995 Ken Hill and Lawrie Johnson changed the name to Corymbia ferriticola.

Corymbia ferriticola mainly grows on ironstone hills, in gorges and on steep slopes in the Pilbara region, with scattered populations near Mount Augustus, Meekatharra and the Gibson Desert.

All content from Kiddle encyclopedia articles (including the article images and facts) can be freely used under Attribution-ShareAlike license, unless stated otherwise. Cite this article:
Corymbia ferriticola Facts for Kids. Kiddle Encyclopedia.