The Cotswold Motoring Museum is a museum in the Cotswolds village of Bourton-on-the-Water, Gloucestershire, England. It features motoring history of the 20th century. 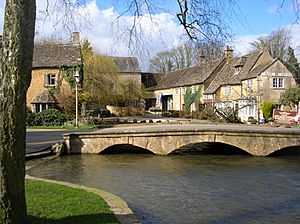 The museum was founded in 1978 by car collector Mike Cavanagh, who also features in Brum. In 1999 Cavanagh sold it to the Civil Service Motoring Association, a not-for-profit organisation, who continues to run it.

In 2003 the Museum won the Heart of England Tourist Board's Visitor Attraction of the Year, and in 2004 they won the Museums and Heritage Award for their interpretation project "Big Ideas for Small Children".

All content from Kiddle encyclopedia articles (including the article images and facts) can be freely used under Attribution-ShareAlike license, unless stated otherwise. Cite this article:
Cotswold Motoring Museum Facts for Kids. Kiddle Encyclopedia.