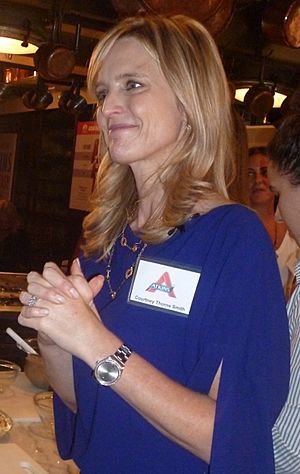 Courtney Thorne-Smith (born 8 November 1967) is an American actress. She is best known for her television work. Her television roles include Alison Parker on Melrose Place, Georgia Thomas on the sitcom Ally McBeal and Lyndsey McElroy on Two and a Half Men. She has acted in many movies and other television programs. Thorne-Smith was born in San Francisco, California.

All content from Kiddle encyclopedia articles (including the article images and facts) can be freely used under Attribution-ShareAlike license, unless stated otherwise. Cite this article:
Courtney Thorne-Smith Facts for Kids. Kiddle Encyclopedia.