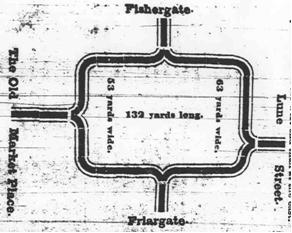 It was in 1837 that Preston Corporation first turned its thoughts to the provision of a covered market and "appointed a committee to procure plans, estimates, etc.". Certainly Council minutes and local press comment show Preston was experiencing some problems with its market provision (In 1841-2 the fish market was moved to a covered area adjacent to the corn exchange and ‘moveable stalls’ were restricted on Preston’s streets).

By 1841 the Corporation "appeared seriously disposed to erect a covered market". Three sites were proposed, east of the present market place, Lune Street, and "the Orchard" (from which the current street name derives, and was the main open space of the town where most outdoor events and annual fairs were held). But in February 1842, the proposals were rejected, the given reason being the strain on the corporation finances caused by the Ribble Navigation. (In this same year, the Corporation had to borrow £12,000 from the Treasury to pay off debts incurred by the Navigation improvements.)

A covered market remained a talking point. In 1846, the Preston Guardian went so far as to propose that "the space allotted to the corn market has always been much larger than was needed" and that the Corn Exchange should be remodelled to create a new covered market.

Plans resurfaced in 1848 and the municipal authorities again resolved to obtain all the necessary surveys, plans and valuations, and to seek to finance the new covered market by a local act in Parliament for "a sum not exceeding £40,000 upon the security of such market and the tolls, stallage, etc., to be received therein". The chosen site was to be between Lune Street, Friargate, Fishergate and the Old Market Place (a location almost identical to that currently occupied by St George's Shopping Centre) and an outline plan, showing dimensions of 63 yards (58 m) at the Lune Street end, by 132 yards (121 m), by 53 yards (48 m) at the Market Place, was published in the local press.

However, once again other projects took priority and the council voted down the proposal on the grounds that the corporation's resources were, at the time, "sufficiently taxed by the improvements in progress". Over the thirty-year period from the idea of a covered market first being mooted, to its final construction, Preston Corporation was undertaking a huge and costly range of civic improvement. It addition to the Port of Preston (including the construction of bonded warehouses and a customs house), Avenham Walk, Oxheys cattle market, Saul Street baths and Town Hall were all constructed and work was planned on the new home for the Shepherd Library (which would eventually become the Harris Library and Museum).

In the early 1850s, plans were once again well advanced, to the extent that the Council itself published a map and plan of the new covered market, whose location was now to be in "The Orchard", in November 1851. But again they ended in "doing nothing".

Finally, in 1860, a "Town Hall and Covered Market Committee" was formed and sufficient finance obtained through the Preston Corporation Markets Act of 1861 and the Preston Improvement Act 1869. The Council minutes of the 1860s show steady expenditure on the land and properties required for the market and its access (and, indeed, income in the form of rent from the occupiers), and comment in the press catalogues the difficult negotiation between the Earl of Derby, the principal landowner and the Corporation. The papers also describes what a congested and inaccessible place Preston Town Centre was at the time, "choked by blocks of buildings" and how the requirement "for complete and broad approaches from every side" for the new market would open it up.

Those same council minutes also show the appearance on the scene of Edward Garlick (1823–1900), who during the 1860-1870s held the roles of Borough Treasurer and Surveyor (for which, according to the Council minutes, he was very handsomely rewarded even by the standards of the day). Garlick went on to become a Justice of the Borough in 1875 and Mayor of Preston in 1882.

The journalist and local historian Terry Farrell suggests there were three plans for a covered market, and states that Garlick "visited several counties to inspect various markets" (perhaps including Liverpool whose covered market was being cited in the local papers as the type that Preston needed) and it was Garlick's own plan which the Council adopted and based upon which the work was put out to tender in 1870. A total of ten tenders for the building contract were received ranging in cost from £6,070 to £9,480 and on 19 January 1870 the council approved the tender and prepared a contract with one of five local firms to bid, Joseph Clayton, whose foundry was in Greenbank Street, Preston. His £6,070 tender was the lowest submitted (the other local tenders were from Joseph Foster £7,070; Edward Bickerstaffe £7,100; William Allsop £6,687 and Preston Wagon and Iron Co. £7,468). Clayton was told Preston required "a commodious market without excessive cost", and a contract stipulating completion by 31 July 1870 was signed. Thus started what was eventually to become known as "The Covered Market fiasco!"

At first, nothing happened. The site on "The Orchard" remained untouched through February and March and the Council became impatient, but Joseph Clayton blamed the delay on the necessity to make all the casting at his foundry before any work could begin on site.

Finally, in April the first pillars were erected, but by the completion date of 31 July the market wasn’t ready and the Council members began to press for a £50 a week penalty to be imposed on the contractor.

On Saturday 6 August 1870, ten men, five on the ground and five on the roof, were at work on the construction. At approximately 7.30am, "...all at once, without the least warning, a great portion of the vast fabric — in fact the whole which had been roofed in — fell with a tremendous crash to the ground". Contemporary historian, Anthony Hewitson, states "the roof, or as much of the roof as had up to that date, been fixed, fell, and the site presented in the centre — the roof collapsed inwardly-by disjointed principals, twisted and broken rods &c., was, indeed, most chaotic". Nine of the workers, including four from the roof, somehow managed to escape uninjured. The fifth, however, named Thomas Bateson of 6 Wells Street was seriously injured and rushed to the Infirmary in a cab by a policeman, P.C. Shakeshift, where he eventually recovered.

A contemporary photograph and an illustration still exist which show total structural failure. If contemporary reports are correct in stating that thirty one pillars had been erected, it would appear that the basic structure was almost complete (the eventually finished covered market comprises thirty two). 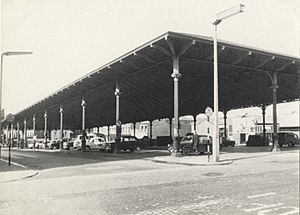 Preston Covered Market in the 1960s 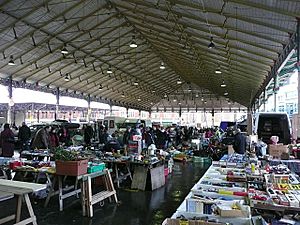 Built to the original specification, the covered market is built of cast iron pillars and lattice work iron roof structure supporting a wood and glass roof. It has a 90-foot span free from internal pillars, and the roof ridge slope drops 13 feet from Lancaster Road to Market Street. Perhaps the most unusual feature is the rainwater drainage. Water from the roof is collected in a concealed gutter and transferred via the structure to drain down the center of the hollow pillars.

Major alterations were made in 1958 when the glass skylights were removed, electric lighting installed and the cobbled floor replaced. The much simpler and smaller structure opposite, the old fish market, was covered in 1924.

All content from Kiddle encyclopedia articles (including the article images and facts) can be freely used under Attribution-ShareAlike license, unless stated otherwise. Cite this article:
Covered Market, Preston Facts for Kids. Kiddle Encyclopedia.