Cowboy Who? facts for kids 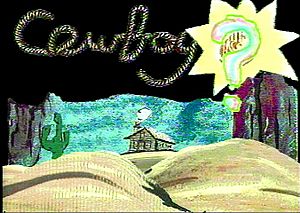 Still from an opening title sequence of Cowboy Who?

Cowboy Who? was an original 45 episode children's television series in Canada, which aired in a half-hour Sunday morning timeslot between 1990 and 1994 on the MCTV system. The show was a collaboration between then radio producer Jeff Green and the children's theatre group Salt & Pepper Theatre Company. In 1987, the Salt & Pepper Theatre Company had written and performed an 8-part series of 30 minute children's radio programs for Ottawa album oriented rock station CHEZ-FM on which Green had acted as producer and engineer. In addition, the theatre group had been involved with CHRO-TV, supplying children's theatre workshops in schools throughout the Ottawa Valley. When the Salt & Pepper Theatre Company were offered a regular slot on the station to help fulfill its CRTC license commitments for original local children's programming, they approached Green to collaborate on a series. In 1990, the team produced a pilot for Cowboy Who?, which gained them a commitment for a season of 13 episodes, and primary shooting began in the fall of that year. Two and a half more seasons were eventually created. The show spent several years in rotation on the MCTV stations.

The show was notable for its technical production values despite its obviously low budget, its humorous social commentary, a deliberate post-modernist structure (it is a television show about a television show that features numerous other television shows), and the cult following it developed during its run. It was further distinguished in that it was suitable for all ages (from infants to adults), and had a broad demographic appeal: providing puppets, cartoons, and on-screen behaviour appropriate to a pre-teen children's program (its ostensible target market); an overt anti-authoritarian angle for older children; and subtle adult humor designed to appeal to parents who were watching with their children. In 2005, a collaboration between Jeff Green and "DVD-Lab" software creator Roman Voska on Green's "Stranger Still" production led to the publication of the first season of Cowboy Who? as a DVD set. 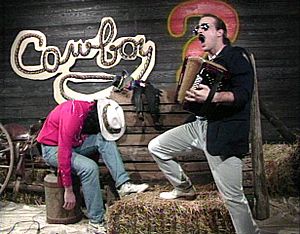 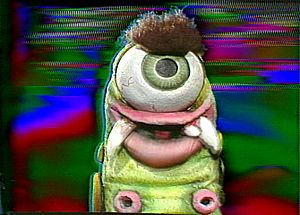 The first season of the series has a developing storyline which establishes the primary premise: the host of the lackluster "Cowboy Pat" show, a run-of-the-mill local children's show that has been on the air for thirty years, disappears in a mysterious flash of light, the oddly autonomous puppet co-host Smilin' Tom enlists the show's apathetic late-teen technician to fill his role, a mysterious figure in black named Chip appears to take over the technician's role, and a bumbling detective arrives to investigate the disappearance. In time Phyllis Blanding, a fussy woman from C.U.T.E.S.E.Y. (The Council for the Unification of Television Entertainment Standards Everywhere, Yahoo!) arrives to oversee their programming. The detective accuses the puppet of being an alien, which to everyone's surprise turns out to be true, a battle for control of the show occurs between a malevolent alien race and the co-hosts, and in the final scene of the season the entire studio building is accidentally launched into space as a result of this battle. Season one also includes numerous mock ads, the "Think about it! With Professor Dave" segment in which a rather empty-headed slacker tries to present nature programming, and "Trail of the Royal Mounted", an actual 1930s Canadian black and white serial re-edited and re-dubbed for comic effect.

Finding themselves in space, Slim, Smilin' Tom, Phyllis, and Chip discover that in space they are able to pick up the astonishing amount of television being broadcast by alien worlds, and they are able to navigate around the galaxy. In time they find that the broadcasting in the galaxy is controlled by a robotic entity called IB (Interstellar Broadcasting), and when an election is announced for the head of IB, Phyllis decides to run. Meanwhile, Smilin' Tom decides he has to find his long-lost twin brother and solicits a television program that specializes in solving mysteries, called "Tangled Webs", to help him in his search. Slim is kidnapped by an alien called Dipswitch but turns out to be just down the hall. Dipswitch is actually trying to connect with Chip, who leaves with him to become a transdimensional being. IB tries many things to keep Phyllis from winning the election, but she is eventually crowned Queen of the Universe and leaves to begin her rule. Smilin' Tom finds his brother running a video store in Peterborough and leaves to join him. The season includes many segments such as "The Rugged Road To Learning", a re-dubbed black and white documentary from 1910, "Sally Polkadot" a sweetly bizarre stop-action puppet show voiced by a British woman (Laura Jarrah), and "Esoteric Knowledge", a low-budget science show apparently from the 60s hosted by the generally misinformed Dr. Onius.

With only Slim left at the station he decides to solicit videos from the audience and otherwise just watches his favourite alien show, "Dee Dee & Dwilfer". The first segment is re-voiced videos from actual school children, the second segment is the "Dee Dee & Dwilfer" show, which has a female host stuck on an alien planet who is helped by a puppet alien named Dwilfer to put on a kid's show. The Dee Dee & Dwilfer show-within-the-show includes several regular segments: "Earthview" is a series of questions supposedly asked of regular school children, but the questions that appear as titles are actually quite different from the ones the children were in fact answering; "Time for Tots" is stories read by Mack Yavellian, who was apparently a technician on Dee Dee's ship but who has been recruited as a reader (he picks inappropriate material, like Edgar Allan Poe); "The Music Box" is a tiny girl in a cigar box held by Dwilfer who sings country songs, but when he starts to sing along he always knocks the box and sends her flying; "Gilbert the Educated Fish" is a talking fish puppet that complains about pollution; and "Story Tales" is little kids acting out fables in a bluescreen environment that sets them against children's drawings of the story locale. In the third show segment Slim in the studio kills the time by tuning in random shows, some apparently alien in origin, others from Earth, and the last show always cleverly wove the show credits into the content. The third season always began with a segment called "Bonehead", a plasticine skull & crossbones that warned children about the dangers of doing almost anything (e.g. "Don't Play With Things!"). Smilin' Tom makes a guest appearance on Dee Dee & Dwilfer in show 7, and in the last episode Tom appears again and at the very end Cowboy Pat appears on the set as he disappeared at the series' opening.

For the last season only six episodes were ordered. Each episode began with a "Cowboy Quote", with Cowboy Pat delivering an odd bit of cowboy wisdom (e.g. "A cowboy's hat is like the leaf of a tree, it always comes off in the fall"). Apparently Cowboy Slim has finally left the studio and left in his place an Automatic Telepathic Interface that allows the viewers to choose from a list of available programs by their thoughts. For some reason viewers always choose "Mack's" which is a show inexplicably given to Mack Yavellian, the somber story reader from the previous season's "Dee Dee & Dwilfer" show. This show has Mack co-hosting with a beleaguered young woman named Tara and a red serpent puppet named Billsy Bubb. Mack seems only interested in showing videos from his "band", who strongly resist all his attempts to guide them to commercial success. He has also arranged for two segments: "Expozany", which is obviously a somewhat strange friend of his who hosts a conspiracy-themed show that he has shot in his basement while wearing a clown mask, and "Esoteric Knowledge", a revisiting of a fictional 60s science "educational" science show starring the remarkably ill-informed Dr. Onius. Tara tries to counter all the darkness of the show with episodes of "Story Tales" as seen in season three. Meanwhile, Billsy tries to make the themes of the shows one of the seven deadly sins, and when he becomes especially impassioned his eyes begin to glow and a sequence is triggered featuring a comically evil puppet called Hobnob that spouts ridiculous curses. This sequence is always interrupted by the automatic interface ("Evil Content Override"). When the automatic interface comes back it always malfunctions, causing a random scan of available channels that show a wide variety of show fragments and fake ads.

All content from Kiddle encyclopedia articles (including the article images and facts) can be freely used under Attribution-ShareAlike license, unless stated otherwise. Cite this article:
Cowboy Who? Facts for Kids. Kiddle Encyclopedia.