Craigellachie is a heritage-listed detached house at 10 Fosbery Street, Windsor, City of Brisbane, Queensland, Australia. It was built c. 1889 by its owner John Grant, a stonemason. It was added to the Queensland Heritage Register on 21 October 1992.

Craigellachie, a single-storeyed masonry residence, was constructed during the late 1880s boom. It was a resubdivision of Windsor-Lutwyche for closer settlement. It was erected by master stonemason John Grant as his family home.

In 1887 Grant purchased just over an acre of land in what was then known as Alice Street. Two years later he raised a mortgage of £450 on the property, which most likely financed the construction of the house in late 1889 or early 1890.

Whether the house was always known as Craigellachie is unclear, as the name does not appear in post office directories until 1904.

Grant and his wife Jane raised eight children at Craigellachie. He died aged forty-five in December 1899, but the house remained the property of the Grant family until 1974.

The residence was converted into three flats probably in the late 1940s or 1950s, but was refurbished in the mid-1970s. The interior was returned to its original layout, paint to joinery and doors was removed, and the exterior was renovated. 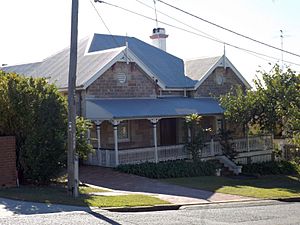 View from the opposite side of Fosbery Street, 2015 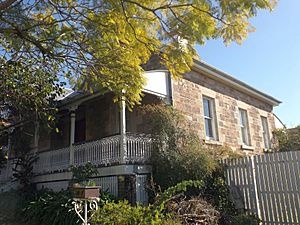 Craigellachie is a modestly proportioned, single-storeyed house with fine stone detailing and Georgian features unusual in a house of this size. It retains its original attached brick service wing and two cellars beneath the core.

The main building is constructed of Brisbane tuff, sandstone and brick, with timber floors and an iron roof. Most likely the adjacent Windsor quarry across Lutwyche Road supplied the stone for the foundations and walls, and it is believed the dressed sandstone employed on quoining and facings originated from the Albion Quarry behind Bartley's Hill. Bricks used in the kitchen house and internal walls were probably manufactured locally, Lutwyche-Windsor being an early brickmaking centre.

It is unified by a full-length verandah resting on brick piers. This is shaded by a convex corrugated iron roof supported by timber posts with capitals and fretwork brackets. The balustrade is of cast aluminium.

Internally the house consists of a wide, central arched hallway with to the right a living and dining room, each with a cedar fireplace, and to the left three bedrooms.

All the windows are sashed, and joinery and doors (with fanlights) throughout are of cedar. A doorway into the front living room has been widened at some stage.

There is an attached brick kitchen wing at the western rear of the building and an L-shaped back verandah. This is unadorned. Recent owners have installed new bathrooms in the core and have renovated the kitchen wing to include a modern kitchen, breakfast room, laundry and shower room.

Craigellachie was listed on the Queensland Heritage Register on 21 October 1992 having satisfied the following criteria.

Craigellachie is significant as a rare Brisbane example of stone and brick employed in a non-elite home of the 1880s.

Craigellachie is an accomplished building in design, detail and material, which contributes aesthetically to the streetscape.

All content from Kiddle encyclopedia articles (including the article images and facts) can be freely used under Attribution-ShareAlike license, unless stated otherwise. Cite this article:
Craigellachie, Windsor Facts for Kids. Kiddle Encyclopedia.