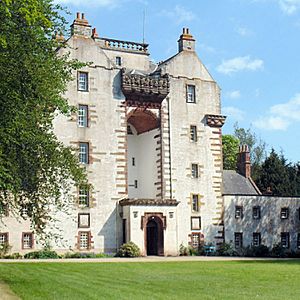 Craigston Castle is located near Turriff, in Aberdeenshire, Scotland, and is a historic home of the Urquhart family. It was built 1604–07 by John Urquhart of Craigfintry (died 1631), known as the Tutor of Cromarty. The castle is composed of two main wings flanking the entrance and connected by an elevated arch, and surmounted by a richly corbelled parapet. There are bases for corner turrets near the top corner of each wing, but the turrets themselves do not appear to have ever been completed. The wood carvings in the drawing room depict biblical themes and Clan Urquhart heraldic artifacts.

Craigston Castle belongs to the "Bell group" of Scottish castles, designed by masons of the Bell or Bel family, and which, according to H. Gordon Slade, "together form perhaps Scotland’s finest and the most distinctive contribution to Western architecture". The castle is still owned and lived in by the Urquhart family, who trace their descent back to Adam Urquhart, 14th-century sheriff of Cromarty, although according to Sir Thomas Urquhart, translator of Rabelais, the family can be traced back to Adam and Eve through "Termuth", who he states found Moses in the rushes, as well as many other fantastic ancestors. 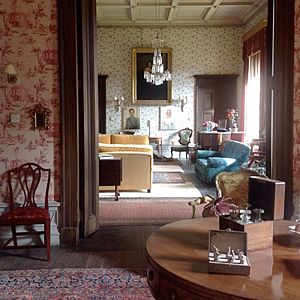 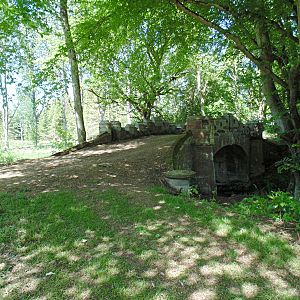 John Urquhart of Craigfintry, known as the "Tutor of Cromarty", built the castle in 1604 to 1607, and the design of the castle appears to show his influence as compared with other examples of the "Bell group". It was sold by the Urquharts in 1657, but bought back in 1739 by Captain John Urquhart, known as "the pirate", great-grandson of the builder. The new owner built the flanking wings, and laid out new gardens, though apparently not to the designs prepared in 1733 by William Adam, the foremost architect of the time. In the 1830s John Smith, the architect of Balmoral Castle, prepared designs for an extensive remodelling, though only a new entrance doorway was built. Craigston Castle is now a category A listed building. The Urquhart family retain possession of the castle, and have recently started to host weddings and other events, as well as letting it out as accommodation.

All content from Kiddle encyclopedia articles (including the article images and facts) can be freely used under Attribution-ShareAlike license, unless stated otherwise. Cite this article:
Craigston Castle Facts for Kids. Kiddle Encyclopedia.