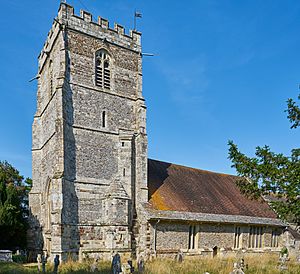 Cranborne Priory was a priory in Cranborne in Dorset, England. The priory church survives as Cranborne's parish church, the Church of St Mary and St Bartholomew, and is a Grade I listed building, with parts of the building dating back to the 12th century.

The monastery of Cranborne is said to have been founded as an abbey for Benedictine monks about the year 980. The chronicle of Tewkesbury states that it was founded around that time by a knight known by the name of Haylward Snew (otherwise known as Aethelweard Maew) who made it the parent house of Tewkesbury.

The Domesday Book of 1086 recorded lands held by the abbey at Ashton Keynes and Damerham. In 1102, Robert Fitz Hamon greatly enlarged the church of Tewkesbury and transferred the community from Cranborne there, leaving only a prior and two monks, and so transformed Cranborne Abbey into a priory, making it subject to Tewkesbury Abbey. This status continued until the dissolution of the abbey in 1540.

The monastic buildings were demolished in 1703. The priory church of St Mary and St Bartholomew survives as the parish church of Cranborne.

The church is a Grade I listed building, having been so designated on 18 March 1955. The oldest parts of the building are the north doorway and parts of the south arcade which date from the twelfth century. The main structure, including the nave and aisles, is fourteenth century. The church is constructed of flint and rubble stone with ashlar dressings, and the roof is tiled and leaded. The tower is at the west end and the porch on the north side. The interior features fifteenth century plastered wagon-roofs, fourteenth century wall paintings, a fourteenth or fifteenth century oak pulpit, and a thirteenth century font with an octagonal bowl. There are a number of monuments in the church, and a recess in the wall of the north chancel may have been an Easter Sepulchre.

All content from Kiddle encyclopedia articles (including the article images and facts) can be freely used under Attribution-ShareAlike license, unless stated otherwise. Cite this article:
Cranborne Priory Facts for Kids. Kiddle Encyclopedia.