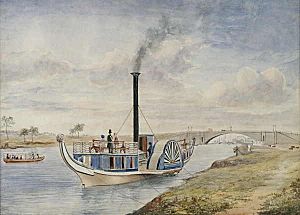 Paddlesteamer Gondola on its way to Cremorne Gardens 1855 near the original Princes Bridge, Melbourne. 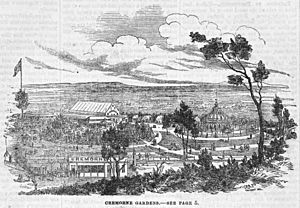 Lithograph of Cremorne Gardens in 1862

Cremorne Gardens was a pleasure garden (now referred to as amusement parks) established in 1853 on the banks of the Yarra River at Richmond in Melbourne, Australia. The gardens were established by James Ellis who had earlier managed and leased similar gardens of the same name on the banks of the River Thames at Chelsea in London. He had been declared bankrupt and emigrated to Australia to take advantage of the business opportunities made possible by the Victorian gold rush and its accompanying population explosion. His first venture in the entertainment world in Melbourne was Astley's Amphitheatre, but his experiences in catering in London inclined him to a profit making business with a wider basis. Because of previous experience he had established contacts in the theatrical world of London. 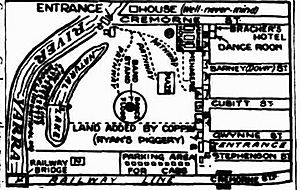 The gardens were acquired by the popular theatrical entrepreneur and local identity George Coppin who expanded them significantly using even better contacts in the world of English theatre than Ellis enjoyed. Cremorne was Coppin's indulgence and hobby and he poured money into them without applying business acumen. For a time he lived on site. The residence had been built by the Colonial Architect, Henry Ginn, who had originally established the gardens as part of his up-river retreat in the mid-1840s. Entertainment provided included a Cyclorama, bowling alley, menagerie, dancers and nightly fireworks. Coppin continued the presentation of the annual panoramas introduced by Ellis. Patrons arrived by riverboat or by train at the purpose built railway station. The gardens were notable as being the location of the first balloon flight in Australia when in 1858 Englishman William Dean floated seven miles (11 km) north to Brunswick. In 1859 Coppin imported six camels from Aden as exhibits for the Cremorne Gardens menagerie and in 1860 he sold them to the Exploration Committee of the Royal Society of Victoria who used them on the Burke and Wills expedition.

George Coppin went bankrupt in 1863 and the gardens were closed.

All content from Kiddle encyclopedia articles (including the article images and facts) can be freely used under Attribution-ShareAlike license, unless stated otherwise. Cite this article:
Cremorne Gardens, Melbourne Facts for Kids. Kiddle Encyclopedia.