Mount of oxyaenid Patriofelis from the American Museum of Natural History.

The Creodonta are, traditionally, an extinct order of mammals which lived from the Palaeocene to the Miocene epoch. They are distant relatives of the Carnivora. However, the carnassial teeth of modern carnivores and both groups of creodonts are not formed from the same teeth. This evolutionary convergence suggests the creodonts are not the ancestors of modern carnivores.

Also, they are perhaps not a natural group. However, a phylogenetic analysis of Paleocene mammals published in 2015 supported the monophyly of Creodonta, and put the group as relatives of pangolins. There is an extensive literature on the subject. 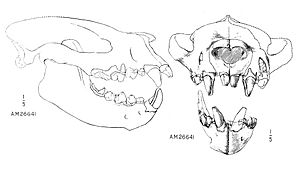 Outline and front view of skull of Sarkastodon mongoliensis. 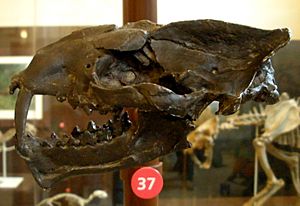 Creodonts were the dominant group of carnivorous mammals from 55 to 35 million years ago (mya) in the ecosystems of Africa, Eurasia and North America. They competed with the Mesonychids and the Entelodonts and ultimately outlasted them. In Oligocene Africa, they were the dominant predatory group.

At last, they lost ground to the Carnivora. The Carnivora are the only group to survive today. The last creodont genus went extinct eight million years ago, and modern carnivores now occupy their ecological niches.

The first creodont fossils were in the Palaeocene, about 60 million years ago (mya), and the last Dissopsalis, perhaps eight mya. So, the creodonts lasted for at least 50 million years.

Creodonts show various adaptations to their carnivorous life-style, and show convergent evolution with modern carnivores. They share, for example, the carnassial shear, a modification of teeth that sliced meat like scissors.

The Carnivora also developed larger brains and more efficient running. Once forest and woodland was partly replaced by grassland, in the Miocene, the true carnivores had the advantage, and the creodonts lost ground and eventually became extinct.

All content from Kiddle encyclopedia articles (including the article images and facts) can be freely used under Attribution-ShareAlike license, unless stated otherwise. Cite this article:
Creodont Facts for Kids. Kiddle Encyclopedia.