Cripps Pink is a cultivar (cultivated variety) of apple. It is one of several cultivars from which apples that meet quality standards can be sold under the trade mark name Pink Lady. Cripps Pink was originally bred by John Cripps at the (then named) Western Australia Department of Agriculture by crossing the Australian apple Lady Williams with a Golden Delicious; the result is a combination of the firm, long-storing property of Lady Williams with the sweetness and lack of storage scald of Golden Delicious. 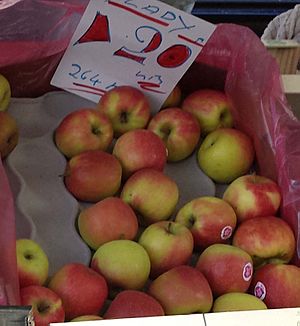 Pink Lady apples for sale on a UK market stall

Cripps Pink is owned and licensed by the Department of Agriculture and Food, Western Australia (DAFWA), which has plant breeders' rights in multiple countries. The peak industry body for Australian apple and pear growers – Apple and Pear Australia Limited (APAL) – owns and manages within their territory the intellectual property in the Pink Lady family of trade marks, which is registered in more than 80 territories. Pink Lady America manages the Pink Lady family of trademarks in the United States and Mexico for Brandt's Fruit Trees of Washington State who own the series of trademarks in these countries.

Registration of the Pink Lady trade mark in Australia has been a challenging process. This is primarily due to the apple being widely known by the industry and public by the trade mark name, Pink Lady, rather than the cultivar name, Cripps Pink. 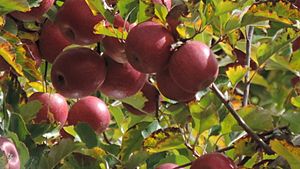 Pink Lady brand apples must meet certain trade mark quality specifications. Criteria for the specifications include sugar content, firmness, blemishes and colour. Inspections are regularly performed to ensure both the quality and traceability of the apple from the orchard to the shop. 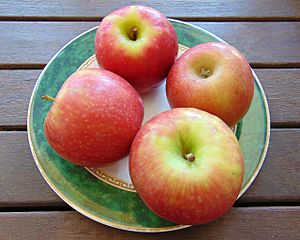 Several natural occurring mutations, called sports, of the Cripps Pink cultivar have been discovered and adopted into cultivation. A number have either achieved registration, or are seeking registration of plant breeders' rights or Plant Patents in multiple countries.

Rosy Glow and Lady in Red have been accepted by APAL and Pink Lady America into the Pink Lady business model, allowing fruit of the improved variety, which meets the Pink Lady quality criteria, to be sold as Pink Lady brand apples. In general, the improved selections produce apples with a larger area of blush. The benefit of higher colour is the potential of higher packouts, and better fruit colour in hotter growing areas. The earlier-maturing strains also allow growing regions to expand, as crops can be grown without fear of losing the crop to winter freeze. Pink Lady America has also accepted the early clones listed as PLMAS98 (Maslin) and PLBAR B1 (Barnsby) as well as Ruby Pink and PLFOG99 into their business model for the Pink Lady brand.

All content from Kiddle encyclopedia articles (including the article images and facts) can be freely used under Attribution-ShareAlike license, unless stated otherwise. Cite this article:
Cripps Pink Facts for Kids. Kiddle Encyclopedia.