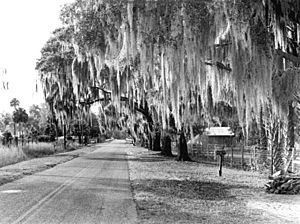 Cross Creek is an unincorporated community in Alachua County, Florida, United States. It is located on Cross Creek, a short stream connecting Orange and Lochloosa lakes.

Cross Creek is located at 29°29′11″N 82°09′42″W﻿ / ﻿29.4863°N 82.1616°W﻿ / 29.4863; -82.1616. The community is situated in the extreme southeastern corner of Alachua County and is approximately 20 miles southeast of the county seat, Gainesville, and 24 miles north of Ocala in Marion County. It is bisected by a navigable waterway, Cross Creek, which connects the two large lakes of Orange and Lochloosa, thus the community is on a narrow isthmus between these two water bodies.

The early settlement of "The Creek", as it is locally known, is somewhat obscure, but it is likely that the first settlers arrived in the late nineteenth century. As a result of its geographical situation (see above), there is limited arable land in the immediate vicinity of Cross Creek, most of the surrounding area being swamps, marshes, and open water. Thus we can assume that other than garden plots and small citrus groves, the first residents probably relied chiefly on hunting and fishing for their sustenance. By the time of Rawlings' arrival in 1928, she writes that "The Creek" was home to seven families, five white (Euro-American) and two black (African-American). The population of Cross Creek began to grow during the 1950s and 1960s when local man Ben Wheeler dug canals and built a number of houses, many with waterfronts. A number of people moved into "The Creek" from other areas including the northern United States, thus the 'cracker' character of "The Creek" was permanently altered. By the late twentieth century the community would have been nearly unrecognizable to Marjorie Kinnan Rawlings. Nevertheless, the unique geographical environs and the presence of a few older houses (including Mrs. Rawlings' home, now both a Florida State Park and a National Historic Site), have helped Cross Creek to retain some local color and given many of the residents a continued sense of exceptionality.

The nearest public high school and elementary school are in Hawthorne, fifteen miles distant. There is a charter school in Micanopy, nine miles away.

All content from Kiddle encyclopedia articles (including the article images and facts) can be freely used under Attribution-ShareAlike license, unless stated otherwise. Cite this article:
Cross Creek, Florida Facts for Kids. Kiddle Encyclopedia.