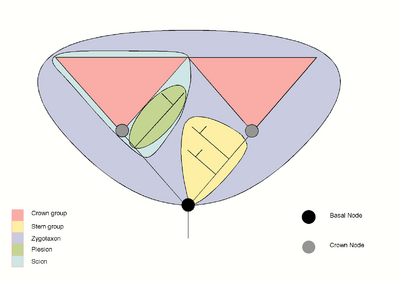 A crown group is a group of living species and their ancestors back to the most recent common ancestor. It is a term in cladistics and phylogenetics. It is a clade with at least some members that have survived to the present day. How a crown group is defined depends on which living species are chosen. One definition stresses the need for members of the crown group to have the clade's characteristic synapomorphy.

The idea was developed by Willi Hennig, the founder of phylogenetic systematics, but he did not use this term. The terms "crown group" and "stem group" were invented by R.P.S. Jefferies in 1979. Though invented in the 1970s, the term was not often used until it was reintroduced in the 2000s.

One very simplified cladogram for birds is shown below:

Archaeopteryx and some other extinct groups are not included in the crown group Neornithes. They fall outside the clade, as they diverged earlier. Neoaves can also be considered a crown group, as can Paleognathae, the ratites clade, and Galloanserae, the ducks and chickens clade. Bigger crown groups can also be defined, such as the phylum Chordata.

The stem group of birds would be all the earlier Aves minus the crown group Neornithes.

All content from Kiddle encyclopedia articles (including the article images and facts) can be freely used under Attribution-ShareAlike license, unless stated otherwise. Cite this article:
Crown group Facts for Kids. Kiddle Encyclopedia.