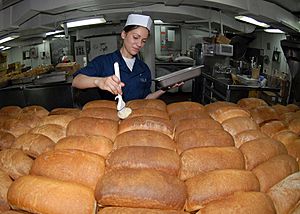 Culinary specialist (abbreviated CS) is a United States Navy occupational rating. It was formerly the mess management specialist (MS) rating until January 15, 2004, and commissaryman (CS) and steward (SD) prior to 1975.

Food service ratings in the U.S. Navy were historically divided into two broad groupings until the merger of commissaryman and steward ratings to mess management specialist on January 1, 1975. Before 1975, stewards prepared and served meals to the officers, maintained their quarters and took care of their uniforms. They served officers in the flag mess for admirals, the cabin mess for the ship's captain and the wardroom mess for all other officers. Until the merger, the steward rating, and its predecessor ratings were largely segregated. Sailors of African, Filipino and Asian descent largely performed these functions.

Commissarymen prepared meals for enlisted sailors in galleys on the ship and shore bases in the general mess. They purchased food from approved sources, stored food stuffs and distributed to the galleys for preparation and kept accountability records.

With the consolidation, sailors in the new rating became "responsible for food preparation and food service for both enlisted and officer messes." To accommodate the change, officers were now required to assume some of the upkeep of their staterooms and personal uniforms. Other cleaning duties became the responsibility of rotational pool of enlisted personnel from the ship. This arrangement continues with the current culinary specialist rating.

In an effort to make Mess Management Specialist (MS) translate to the civilian sector, the rating title was updated to Culinary Specialist (CS) in 2004. This change allowed for easier recruiting tactics when giving job descriptions related to various civilian jobs with similar titles. It also provided Sailors transitioning into the civilian sector an opportunity to use their culinary certifications that would now correlate into numerous career paths, including food production methods, cost control, nutrition, sanitation, and food marketing. The Culinary Specialist rating now belongs to approximately 7,500 food service personnel who feed over 300,000 US Navy sailors worldwide.

Culinary specialists operate and manage U.S. Navy messes and living quarters in addition to many other duties as follows:

Navy culinary specialists operate messes for the President of the United States in the White House and at Camp David.

All content from Kiddle encyclopedia articles (including the article images and facts) can be freely used under Attribution-ShareAlike license, unless stated otherwise. Cite this article:
Culinary specialist (United States Navy) Facts for Kids. Kiddle Encyclopedia.