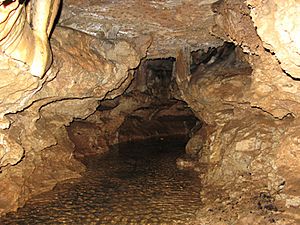 A passage in the cave before installation of the new boardwalk.

Current River Cavern was formed exclusively by the stream that still runs through the cave; a rarity among Missouri caves. The cave is set in the Eminence Dolomite.

Current River Cavern is the first show cave to use all battery powered, wireless LED lights for illumination. The LED lights do not promote algae growth or harm cave life. In addition, the lack of wires through the cave creates a more safe and natural experience.

All content from Kiddle encyclopedia articles (including the article images and facts) can be freely used under Attribution-ShareAlike license, unless stated otherwise. Cite this article:
Current River Cavern Facts for Kids. Kiddle Encyclopedia.