Cymbidium canaliculatum, commonly known as the channelled boat-lip orchid, tiger boat-lip orchid, native cymbidium or tiger orchid is a plant in the orchid family and is endemic to Australia. It is a clump-forming epiphyte with large, greyish green pseudobulbs, each with up to six curved, deeply channelled leaves and up to sixty fragrant, variably coloured flowers that often have spots and blotches and a white to cream-coloured labellum with red markings. This orchid usually grows in the forks or hollows of trees and is found from New South Wales to the northern parts of Western Australia. 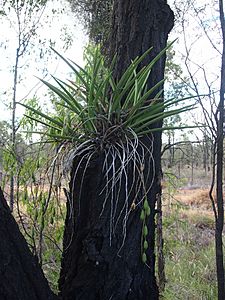 The channelled boat-lip orchid grows in the forks or hollows of trees in woodlands and drier forests in the Kimberley region of Western Australia, the northern parts of the Northern Territory, (including Melville Island) and from the Cape York Peninsula in Queensland south to the Hunter River in New South Wales.

All content from Kiddle encyclopedia articles (including the article images and facts) can be freely used under Attribution-ShareAlike license, unless stated otherwise. Cite this article:
Cymbidium canaliculatum Facts for Kids. Kiddle Encyclopedia.