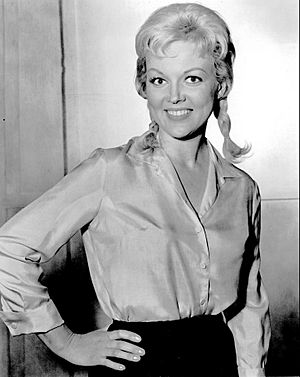 Cynthia Lynn (born Zinta Valda Zimilis; April 2, 1937 – March 10, 2014) was a Latvian-American actress. She was best known for her role as Fraulein Helga in Hogan's Heroes during the first season (1965–66). She was born in Riga, Latvian SSR, Soviet Union.

Lynn died from multiple organ failure as a result of hepatitis on March 10, 2014. She was 76. She was outlived by her daughter, Lisa Brando, whose father was Marlon Brando.

All content from Kiddle encyclopedia articles (including the article images and facts) can be freely used under Attribution-ShareAlike license, unless stated otherwise. Cite this article:
Cynthia Lynn Facts for Kids. Kiddle Encyclopedia.