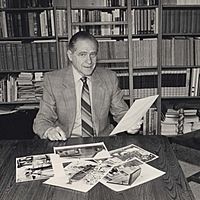 Cyril Edel Leonoff (February 22, 1925 – April 17, 2016) was a Canadian civil engineer, historian and author. He was the founding president of the Jewish Historical Society of British Columbia. He was born in Winnipeg, Manitoba.

All content from Kiddle encyclopedia articles (including the article images and facts) can be freely used under Attribution-ShareAlike license, unless stated otherwise. Cite this article:
Cyril Leonoff Facts for Kids. Kiddle Encyclopedia.