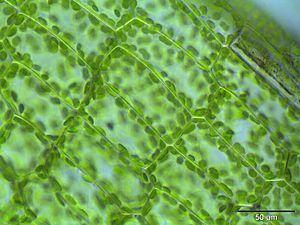 Streaming is often seen in large plant and animal cells. Cytoplasm moves inside the cells. The flow is driven by forces in the cytoskeleton. The function of the flow is probably to speed up transport of molecules and organelles around the cell. Cytoplasmic streaming is usually found in large cells, larger than about 0.1 mm. In smaller cells diffusion of molecules is rapid, but it slows as the cell size increases. Larger cells need flow to move nutrients inside them rapidly enough for efficient working.

All content from Kiddle encyclopedia articles (including the article images and facts) can be freely used under Attribution-ShareAlike license, unless stated otherwise. Cite this article:
Cytoplasmic streaming Facts for Kids. Kiddle Encyclopedia.