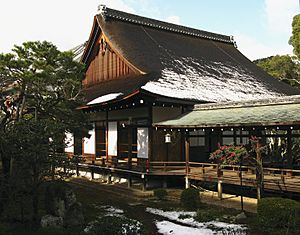 The Shōshinden was built in the Momoyama period

The earliest structures were built in the early Heian period as a villa of Emperor Saga (785-842). Osawa pond, the artificial lake in the Japanese garden, was created in Saga's lifetime.

After Saga's death, a Buddhist temple complex was established at the site. Imperial princes were often appointed as abbot of the temple.

In the 14th century, the temple came to be associated with the Kameyama branch of the Imperial family.

All content from Kiddle encyclopedia articles (including the article images and facts) can be freely used under Attribution-ShareAlike license, unless stated otherwise. Cite this article:
Daikaku-ji Facts for Kids. Kiddle Encyclopedia.