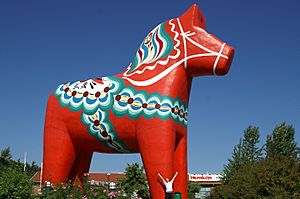 The world's largest Dalecarlian horse, made of concrete and located in Avesta, Sweden 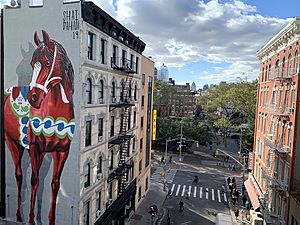 A Dalecarlian horse or Dala horse (/ˌdɑːləˈkɑːrliən/; Swedish: Dalahäst) is a traditional carved, painted wooden statue of a horse originating in the Swedish province of Dalarna (Dalecarlia). In the old days the Dalecarlian horse was mostly used as a toy for children; in modern times it has become a symbol of Dalarna, as well as of Sweden in general. Several types of Dalecarlian horses are made, with distinguishing features common to the locality of the site where they are produced. One particular style has, however, become much more common and widespread than others. It is stoutly carved and painted bright red with details and a harness in white, green, yellow and blue.

A Dala horse painted by Rytter Olof Matsson, Risa, around 1910.

Early production of Dala horses was concentrated to four villages: Bergkarlås, Risa, Vattnäs, and Nusnäs, all in the parish of Mora. Production is believed to have started in Bergkarlås and later spread to nearby villages Risa and Vattnäs through kindred. At about the same time production started independently in Nusnäs, and being farther away their style was less influenced by those of the other villages. The individual painters each had their particular style, and the few who are old enough to remember first- or second-hand the history can often tell which village, and in some cases which carver or painter, turned out a particular horse. The distinguishing features of many early painters from these villages have now been documented.

Many of the works by the earliest horse makers are no longer in existence but those that remain are cherished by their owners and have often been passed down through generations. These are also coveted by collectors, and their value has risen markedly over the years.

Today, many of the villages in Dalarna county make Dala horses with individual styles representing the district of origin. These horses also have distinctive shapes and often come in different sizes. Some horses like the Nusnäs horse are stocky work horses; others are lean and upright with stately countenance like the Rättvik horse. Many of these can be seen at a yearly exhibition (since the year 2000), which is held at Klockargården in Leksand, Sweden. Currently about forty present carvers and painters show their Dala horses and put them up for sale.

Today, Nusnäs is the centre of Dala horse production with the most famous being the Nils Olsson and Grannas Olsson workshops. Grannas A. Olssons Hemslöjd AB, founded in 1922, is the oldest company which still makes Dalecarlian horses. Nils Olssons Hemslöjd is almost as old. The horses made at these workshops share the same familiar pattern which most people associate to Dala horses. Apart from these, old-style horses are also hand-carved and painted in limited editions to replicate the style of the antique horses found in Swedish museums or held in private family collections. These are numbered and signed, so that they cannot be confused with an original early Dala horse.

The wood from which the figures are carved comes from the slow-growing pine forests around Lake Siljan. The wood is ideal for carpentry and carving. The trees to be made into horses are marked out while still standing in the forest. Only the best timber will be selected for carving into horses. The trees are felled and sawed into pieces of a suitable size for the blanks that will eventually be made into Dalecarlian horses.

The blanks are sawed and carved by hand. Because of this, no two horses are exactly alike. The horses are dipped in primer immediately after carving, to reveal any defects in the wood that may need to be fixed. After priming, any cavities in the wood are filled in to ensure extra smoothness. The horses are polished to give them a smooth, attractive finish.

After sanding, the horses are dipped into paint of the appropriate colour. The traditional pattern is painted free-hand by practised "ripple" painters. The art of rippling requires great skill and takes many years to learn. Finally, "all the fine horses" are varnished and sent out from Nusnäs to serve as a symbol of Sweden in the outside world.

Dala horses in the United States

Dala horses were introduced to North America at the 1939 World's Fair in New York. The architects Sven Markelius and Anders Beckman chose the dala horse because they were searching for a powerful symbol for the Swedish pavilion at the fair.

All content from Kiddle encyclopedia articles (including the article images and facts) can be freely used under Attribution-ShareAlike license, unless stated otherwise. Cite this article:
Dalecarlian horse Facts for Kids. Kiddle Encyclopedia.