Cloquet ( kloh-KAY) is a city in Carlton County, Minnesota, United States, located at the junction of Interstate 35 and Minnesota State Highway 33. A portion of the city lies within the Fond du Lac Indian Reservation and serves as one of three administrative centers for the Indian Reservation. The population was 12,124 at the 2010 census. 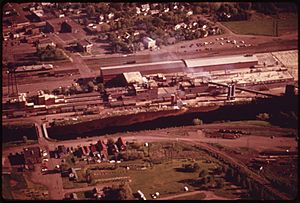 Cloquet began as a group of small settlements around three sawmills: Shaw Town, Nelson Town, and Johnson Town. These later became known as Knife Falls after a local waterfall over sharp slate rocks, and later as Cloquet. The area was platted in 1883 and the village of Cloquet was incorporated from the three settlements in 1884. It became a city with a mayor and city council in 1904. The word "Cloquet" first appeared on a map of the area by Joseph N. Nicollet in 1843 which named the Cloquet River, a tributary of the Saint Louis River, and the Cloquet Rapids to the north. "Cloquet" is a French surname but historians researching the name of the river and city have found no definitive answer, and are reduced to speculations. One of these is that the river might have been named after 19th century French scientists, the Cloquet brothers Hipployte and Jules, with the settlement later being named after the river.

The area was the site of the 1918 Cloquet Fire, which destroyed much of the town and killed approximately 500 people.

Cloquet is famed in American economic history because before and after WWII it was home of the strongest consumers cooperative of the country. The Cloquet Coöperative Society (founded 1910) operated two cooperative stores which handled food, hardware, shoes, dry goods, and furniture. Other cooperative services included a building supply store, a coal yard, a mortuary, an auto repair shop and a gas service station.

In 1939, the co-op did 35% of the business in the town, and 18% in Carlton County. By the mid-1950s, the consumer society had a membership of 4,262 out of a population of 8,500. This was a national record, given the fact that the total business of all American co-ops combined represented only 0.5% of the economy. The Finnish cooperative groups of the area also had an influence on the American cooperative movement in general.

Cloquet is home to the R.W. Lindholm Service Station, the only gas station designed by architect Frank Lloyd Wright and a structure now on the National Register of Historic Places.

Cloquet is located along the Saint Louis River, 20 miles southwest of the city of Duluth. 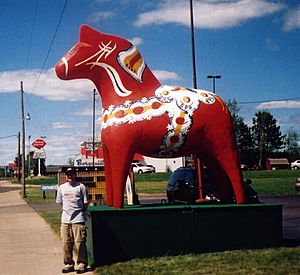 There is a K-12 tribal school, Fond du Lac Ojibwe School, affiliated with the Bureau of Indian Education (BIE).

All content from Kiddle encyclopedia articles (including the article images and facts) can be freely used under Attribution-ShareAlike license, unless stated otherwise. Cite this article:
Cloquet, Minnesota Facts for Kids. Kiddle Encyclopedia.